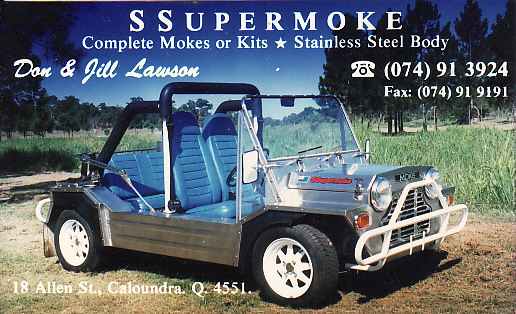 In the mid 1980's Don Lawson, the owner of a refridgration company started producing stainless steel Moke bodies as his take on solving the issue of rusting Mokes. Called the SSSuperMoke all the panels were unique and with few exceptions familiar to an original Moke formed from his own Jigs. About five or six are know to still exist on the road and in 2009 four or five completed shells and a 20' shipping container were up for sale in Brisbane from the Lawson family. M&R Smash were also involved in dismantling the genuine Mokes and transfering the parts on to the stainless steel shells

1989 photo of one exists in shopping centre car park.

In 2008 10 shells were available for sale at Caloundra and one completed "Ron's " Moke.

Heard of one in Coburg, Vic which may be the one spotted in 2008.

May 2012 one for sale on eBay. August to November possibly the same one is for sale on CarSales.com.au It maybe the yellow seats Moke.

2017 SS with Yellow seats purchase by a Victorian. Turned up trying for club plates in March 2018

2018 the Moke spotted in the frieght yard is no longer registered in Victoria.