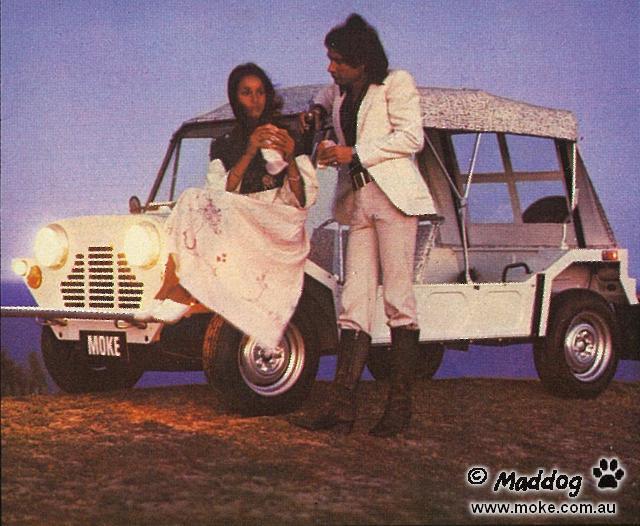 A special order of Mokes were destined for the US Virgin Islands in 1970 however the order was cancelled later on, however the wheels of production were already turning and the Mokes were still built with their unique features and mostly released to the local market. With renewed interest I have been working with BLMC Historian Tony Cripps to try and uncover as much of the real history of this limited run of special Mokes.

While Tony  and his fellow historian Peter Davis, who held senior roles with BMC/BLMC during the production of these vehicles have access to various documentation, drawings and other ex-employees which I expect they will expand on in their books that they publish, I have been contributing to understanding the story so far from my knowledge of Mokes and the Mokes as part of the Australian Moke Register. As you will read there is more than one instance of where what the factory intended or expected to happen doesn't seemed to be reflected by what appears to have actually been produced.

The general history of what is commonly called the Export Moke appears to have began in 1969 as early drawings dated Jan 1970 of the Nomad, the original name of the special order Mokes, leads up to the official internal announcement in April 1970 that an order of 300 Left Hand Drive Mokes destined for the US Virgin Islands had been placed. A number of special features were included to meet US standards with the most obvious one being the deeper wheel guards that included red and amber lights and reflectors which exist on all known models.

During the time of the announcement a lady driver was killed in the US Virgin Islands when her UK built Austin Moke caught fire after a left side impact, where the fuel tank is located. A couple of Australian employees of BLMC were sent to attend the ensuing court case that ultimately saw the cancellation of the order for 300 Mokes. However along the time line in what we assume to be an attempt to salvage the deal there were design changes made to relocate in the fuel tank into the rear which is ubiquitous with what we now know as the Export Moke, however the changes were not enough to keep the deal alive. With the orders for the special parts already with the UK parent company the Mokes were eventually built to use up the parts ordered and produced mostly as right hand drive and eventually released onto the Australian Market from late 1971 through to July 1973.

A small number of original LHD Mokes were built, I call them the prototypes Mokes retaining the left side fuel tank and an early black and white photo shows two such vehicles  and the early documentation expected them to be fitted with the 1098 engine, however two examples of these Mokes are known to still exist and show they came with 1275 engines of an earlier prefix than the bulk of the Export Californian Mokes fitted with the later 1204 prefixed 1275.

Initial drawings suggest the Nomad was given the designation of 2/YDO18 however as more changes from the standard Moke were commissioned by the time they were made it gained its own drawing office designation of YDO30. Various factory documents list the body prefixes on the vehicles are listed as YJBAB10, YJBAB11, YJBAB12, YJBAB13, YJBAB14 and O30COB, however the 12, 13 and O30 are on the bulk of  Export Mokes built. The name Californian came about from the Sales Director at the time thought that the “beach culture” of California might translate to Australia so hence the name and the change of focus to visual effects like the special print hoods to be more attractive to the local market.

When it comes to the term Export Moke there are odd references in the documentation to the word Export, but I haven't noticed a strong designation of  the term Export for these vehicle as standard Mokes were already being exported at the time while I think the common reference to these as Export Mokes seems to have come about later, possibly to avoid confusion when the marketing department reintroduced the name Californian in 1977 as part of an updated look.

The time line of when things occurred is still fairly fluid as there is really only the date of the announcement of the order in April 1970 and the dates appearing on the Australian Design Rule(ADR) plates, the engineering drawings, the many snippets of information being uncovered that need more work to provide a plausibly time line of events to give a more definitive order of when things happened. And that has been part of the fun and frustration of researching this particular Moke with numerous emails going back and forth as more information is added to the mix and we try to make sense of where it fits in.

As far as how many of these Export Mokes were built there are  two figures that I think are credible, either 300 or 1,000 as being built, however for as long as I have been involved with Mokes there have been the all sorts of numbers thrown around that just get passed around but they don't really stack up at this stage.

The 300 number comes from Peter Davis who in his role as Production Manager at the time recalls only placing an order for 300 sets of the special parts needed with the UK and with only 60 Export Mokes on the Australian Moke Register that seems like a reasonable number to assume is correct at first glance. The 1,000 figure comes from the range of serial numbers we find on the Australian Moke Register(AMR), with the lowest number being #506, supporting a starting figure of #501, and the highest number being #1498 on a July 1973 O30COB1M12 Moke. The competing arguments for each figure is where did the parts for another 700 Mokes come from or what happened to the other 700 serial numbers allocated in this range of vehicles. I don't believe we have enough data to put one number to rest or the other at this stage. There are two Moke known to share the same serial number that could lend support to there being multiple sequences of serial numbers starting at #501, which would mean an even higher number again, but that exists between an actual Moke and a serial number on a list of paper so it is less solid than it looks.

A more detailed breakdown of the nitty gritty details can be found in this article, Export Mokes, for the spot weld counters