Andrew G. takes us through the restoration of his nice red Moke that he built in 2005

Along with a good number of other people, I have found the obsession with the Moke, to be challenging and rewarding. At this stage I have yet to drive my yet to be named moke. Here is a little history on my project:

It started with a few drinks on a lazy Saturday avo, looking at E-Bay . I found a Moke in far north Queensland, looked in good nick and a fair price, as I live in South Australia, 80 Ks south east of Adelaide, it seemed like the making of an adventure, driving down from QLD to SA. My wife soon ripped me back in to reality, two kids and a mortgage there was no way I could get away.

This planted the seed of the Moke, I owned a Moke some 10 years ago, enjoyed the summer cruising, then flogged it off to buy my first new car.

Much E-Baying and classified browsing failed to find the Moke I was after - Something in fair condition, I could spend a lazy few weekends tiding up, the drive around - all for under $2000 - keep dreaming!

One of my work mated spotted an advert in Adelaide for a Galv moke and donor Moke - $1500 or best offer - My prayers seemed to be answered. I hooked up the car trailer and loaded the pocket and went for a drive to Adelaide. In the dizzy rush, I handed over my $1500 and loaded up a white donor moke. At the time this all seemed a reasonable and sane proposition. Swap the parts from one moke to another. Rego it and drive away.

My first reality check occurred after sleeping of the adrenaline of a purchase and looking at my donor in the cold hard light of day. - I had become the owner of a shabby 1977 998 moke, mostly complete, and was going to transplant it into a Gal 1980 Moke. - It was here I started some research - a little late I may add. It seems I had two vehicles, either side of a model upgrade. - No front or rear bumper, a damaged windscreen surround - and the list goes on.

I soon learnt the internet research and a few good books could have saved me a lot of troubles.

I collected the Galv moke shell and put them away in the shed, and started to research. The differences in the 1980 model were far to great to just slip in the parts from the donor. Most people in the know would see the irregularities. I started the hunt for parts to add to my Galv shell.

After touring the Mini / Moke haunts of Adelaide - and getting a "fair" to "I cant be bothered" response from the staff, I found Tony, at Mini Sport. I had purchased a "in good condition" additional motor, sub frame, and drive shafts and drums from Blair Athol Motor Wreckers. It was in good nick for it age and in a fair and reasonable condition, 80,000 K and had not been touched. The only problem, it was out of a mini, with a mini front sub. - Once again with my limited understanding at this time I though - no real problems - it will do.

I took the motor and sub to Tony - he changed the diff ratio front the mini to the moke ratio. He stripped the front sub, and swapped it for a Moke front sub (with the correct front bumper mounts). I also dropped off the rear sub, which got stripped. I Grit blasted the front and rear subs, returned them to Tony for a overhaul. New bushed, bearings, drums, brakes, ball joints, bump stops, hand brake cable.

I had the clutch, water pump, inlet manifold, plugs, points and oil replaced and fitted a set of extractors to the motor. Got Tony to hot run test the motor and at last all was looking good. Yet another trip to Adelaide to collect the subs and motor - Along with the ever increasing list of parts:

In the mean time I had begun stripping the body - I started with a wire wheel (until I killed my 5" grinder) - tried paint stripper - my moke had ad paint job earlier and the paint striping was a little slow. - It was off to the Grit blasters for a whip of garnet, to get rid of the rest of the offending old paint. I also dropped in my rims, seats, entire dash, steering coulomb, pedals and the old heater in bits. A light and I mean light blast (trying not to remove any of the galv) and the body was around to the paints.

I was very lucky, I had no rust in the body or any panels, the any suffering item was the windscreen surround. As the surround was off the donor moke, I had to extend it, to mount on the Galva body. I sacrifices the lower frame, using it to extend the frame and made a new lower out of stainless steel sheet, bending it up at work (I work for a engineering shop). After hunting the usual haunts for the wind screen rubbers, with no luck, I cleaned up and re used the old ones.

I took a few weeks off from work and prepped the body for the pain work. The front end had had a hit at some stage and was full of bog. I fitted some 12mm angle to the engine side of the front panel, stiffing it up, getting it flat, a "wipe" of bog and a lot of sanding and the front was looking as good as new. A wipe around with the mig welder, filling all the un wanted holes in the body - the hood mount press stud holes, rear lights etc. A bit of grinding and another wipe of bog and we were on our way to get some etch prime and primer on the Moke.
I flipped the moke over and gave the under side a thick coat of two Pac tar. It is used to coat house boat pontoons. Once dried, the moke was flipped upright and I also coated the floor pan and foot well. The Tar is an international product.

The Moke got a lick of Etch and once dried got undercoated. The inside was wet coated a white, up to the top of the inside body. The undercoat got a wet rub, once flat I drip sealed the seams for a smoother look. The engine bay got the first lot of colour - a bright red. Once complete, the moke got masked up and the rest was coated in red. Near on 2 weeks prep and it was painted in less than an hour. After a baking and cool off, I loaded the painted body on the trusty trailer and it was back home to the shed.

I let the body sit for a day, to give the paint a chance to harden.

I had the seats re trimmed, once undercoated and painted. The dash and heater parts were powder coated black. I pulled the old Speedo apart, re painted the bezel and inner bezel, replaced internal glass rubber seal, cleaned all the old paint off the glass and re assembled. I had the old dash panel cut out for an additional 3 gauges, oil, water and taco. I tried to get Smiths gauges, but the unfortunate expense led me to get some VDO ones instead.

I was going to re make the wiring loom. but chose to alter and re use the donor loom, I de-greased it, washed, dried and re taped it up, altering the headlight switch, as it was now on the steering collum. My biggest problem came when trying to alter - re wire the wipers, upgrading the system to a wiper stalk set up. The wiper stalk I got came from UK, had different wire colours and I could not find much info on the conversion. Ending up finding some good info on a UK MG site. The colours matched my wiper stalk and I was able to map out the conversion. 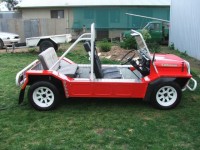 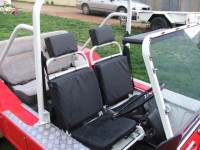 I still have to manufacture a roll bar (read seat belt mount) and the side screens. I have yet to source hood and bows, I am still debating if I will fit a hood or keep it for a fine day driver only.

I have learnt so lot - and still have a lot more to learn. The moke still has original drums all round and a 998. I would like to do the 1275 and disk conversion, but I have spent way to much so far - I will just settle on having the Moke together and do a little driving first.

All being well I am going to head to Vic for the 40th.
By no means have I done everything the best way or have I spent my time and money the best I could have, what I have produced is a tidy Moke, one that I plan to keep for a long time.

Please feel free to contact me, I am more than happy to help.

This email address is being protected from spambots. You need JavaScript enabled to view it.