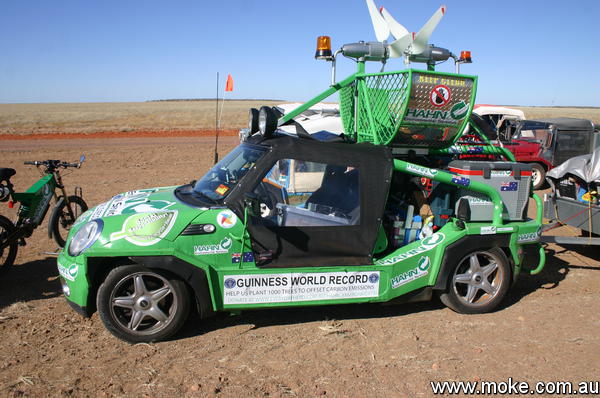 After leaving Bridsville and heading east on the 2011 Outback Icons trip we came across this 'BMW Moke' heading the other way as part of a World Record Attempt to pedal an electric bike, which is a contradiction when you think about it, the 1600km to Birdsville.

The BMW Moke was part of a support vehicle for a ride by Hahn Enviro Services CEO Allan Lear to ride an Electric bike more than 1200km to break the current world record for an electric bike. He chose Birdsville races as his destination and managed to increase the record to 1649km, un-officially.

Besides towing the trailer, the BMW Moke also has two large wind turbines on top used to generate electricity used to re-charge the batteries for the Electric Bike making the attempt, a couple of fridges and other electric amenities Alan and the support crews were carrying. There were two or three other guys on Postie Bikes making up the support crew which did look oddly familiar but more on that later.

The car itself is, or was, a BMW Mini they retrieved as a wreck from somewhere and then grafted some of a Moke body onto the BMW Chassis and panels in a rather hurried attempt to make it an interesting vehicle, which they definitely achieved. On the road it does attract attention but it doesn't take much looking to see just how rushed they were and what a nice bright paint job and a few stickers can do for the looks of a car.

Now for all the hassles we have getting engineering approval on basic items on Mokes this thing got approved and registered in Queensland as a Moke and not the BMW Mini it is based on!!!. As you can see in the photos there is not a lot of Moke panels on the car at all which makes it event more astonishing that this thing got registered as a Moke.

You can see the 'sideboxes' got extended to make up for the lack of length on the BMW chassis and has a rather odd look about it which makes it look like the back end is dragging on the ground. It is hard to tell how much the thick bar work is for looks and how much it holding the car together along with the turbine assembly.

When we met the guys the Turbine fans were strapped up to prevent them turning and they undid the straps for the photos and then strapped it up again before they left. There were two spare bike batteries on the car, a couple of fridges and who knows what else but obviously they did need any electricity. I will be honest and say I couldn't see the point of all this extra stuff to essentially charge a couple of small batteries which could have been done with an inverter in the ciggy socket.

The BMW Moke is owned and built by Hahn Enviro Services in Queensland whom people may recognise as the same company who created a rather long Moke that runs on organic matter like gum leaves etc. More Here

Now back to the support crew on Postie Bikes I mentioned earlier. As a bit of a long shot I asked Allan if his group was part of the Postie Bike Challenge that built a Moke for a support vehicle a few years ago, yes they were, and what happened to Moke and Trip as their blog stopped after day two? It seems the Moke fell apart(which a few of the forum predicted would happen) and they packed up and went home.

I can't find the link to the Postie bike youtube clip at the moment, but some people may remember the Moke with huge overhangs of alloy bars front and back driving around a workshop in the dark that was discussed on The Moke Forum.

So definitely different and interesting but not really enough Moke to get me too excited about it, however there was a lot of driving so a welcome break to chat to a bunch of guys who are playing with Mokes and doing differents things with them.

For more details and clips of the adventure check out http://www.hahnenviro.com.au/birdsvilleorbust