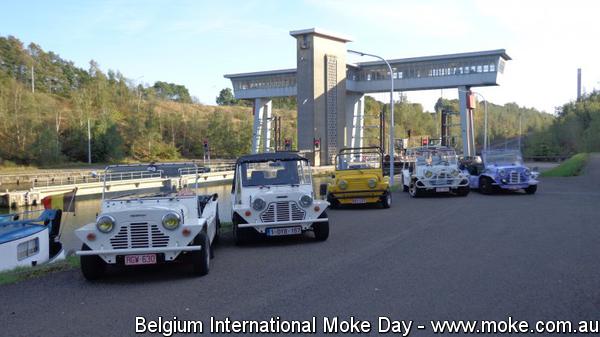 Belgium Mokes were out in force again this year for IMD

For the second time, Belgian mokes came together to celebrate the International Moke Day for a convoy trip, in the French speaking part of Belgium this time. Four mokes (2 Cagiva's and 2 U.K.'s) and a French schmitt (basically a dwarfed down version of the moke) gathered in the shadow of the famous lion statue on top of the hill in Waterloo, where Napoleon was defeated in the battle. After a (much needed!) warming cup of coffee in the Wellington pub, we set of for the trip.

Just as last year, the sun started to shine by the time we left the start location, and unlike the rest of the week, not a drip of rain spoiled it! We drove in between the battlefields where it al happened in 1815, and the first leg of pittoresque roads lead us to the remainings of the breath-taking 12th century abbaye de Villers. No time for visits as it was going to be a long day, but the outside view was stunning allready.

The next, slightly longer part got us to our lunch in Seneffe, followed by a quick drive around-and photoshoot near the BMC assembly halls, where, among others, the Austin Allegro and the mini were assembled. The halls closed down in 1981.

After leaving Seneffe, we visited 3 types of  boat lifts on 3 different locations, and not the least ! The modern vertical boat lift in Strépi-Thieu being the tallest boat lift in the world, the classic one in Houdeng-Goegnies which is listed by the UNESCO as of special cultural or physical significance, and the inclined plane of Ronquières, where the boats are pulled on rails over a 1400 metre distance. It felt like a scool trip for some. But surely one in style !

By the time we got home again, most of us were on the road for 12hours, needless to say it was an exhausting but enjoyable day for everyone. Well, almost everyone. Our moke-friends who had prepared the whole route on paper, stranded their moke the day before in England with technical failure, and couldn't make it in time. But we'll make up for that on next years' IMD for sure !