Over the years Mokes were fitted with four different sender units - depending on the year and the type of fuel tank.

While none of them are available new any more, there are a few options for fixing or replacing all of them.

These were fitted to all little wheelers and early big wheelers until 1968-69. They are easy to pick, with six small screws holding them in. 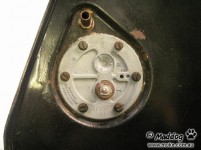 Replacements or parts are no longer available, but fortunately a Mini van sender will fit straight in making them one of the easiest senders to repair!

The van arm is slightly shorter, meaning the gauge will read full for a while and have a healthy reserve left when it reads empty. You can either learn to live with it, or extend the arm to match the original.

From around 1969-70 through to around 1975 Mokes were fitted with a more modern type of sender held in with a locking ring.

They are easy to spot when out by their triangle shape and the tank can be identified by the flat side and locking pin location.

If yours doesn't work, there are a couple of things unique to these senders to check. Firstly the earth to the arm is provided by a small piece of copper braid - which tends to work harden and break. 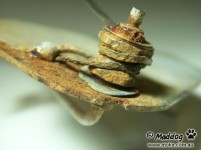 Check that it is intact, and if broken it can be replaced with a peice of fine soldering wick. Leave it fairly loose and allow one turn around the pivot.

The other problem is the very fine wire on the rheostat is simply soldered onto the output terminal - check that is hasn't broken off. 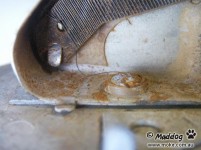 The only new part available for these senders is the rheostat, which can be harvested from a new mini sender. Unfortunately the arm is reversed with the contact on the opposite side, so you will be stuck with using your old one.

Fitted from around 1975 on, the later locking ring sender had a square body and two tabs to locate it. 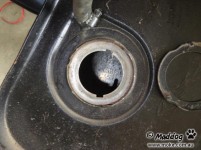 While the actual body of the sender is quite different, all the internal working parts are the same as a new mini sender. With a lot of patience it is possible to rebuild these to as new.

While you may know the year your Moke was made, fuel tanks are easily swapped! To save some heartache when you pull the fuel tank out only to find you have the wrong replacement sender - here's how to easily tell the difference between an early locking ring and a late one.

Simply take the front pannier cover off and have a look at the sender! 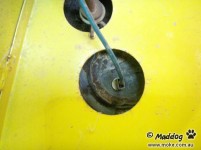 The easiest one of all to identify - as they are all the same. Basically they are the same as the late top fill sender, with a few changes to the bends in the float arm.

Because they are fitted to the top of the tank instead of the side, they do suffer badly from moisture condensation and rust. If yours isn't working, then it may just be stuck. Fortunately they are very easy to get out compared to a top fill tank!

Sometimes of course it may be a bit more serious.... 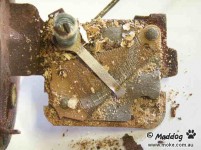 Again, replacements are no longer available - but all the internal working parts are the same as a new mini sender, and the mini arm can be modified to fit.

While we are using mini senders for parts, it's probably worth seeing what they look like.

The locating lugs are in a square pattern, and won't fit any Moke tank. The sender unit also hangs out sideways on a rod, as the mini tank is tall and thin.

But they are readily available new, and most parts are directly interchangeable with a Moke sender - with a few modifications. 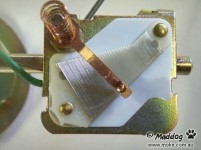