For last years of production the square Hella was fitted to Mokes from around 1977 to 1982. 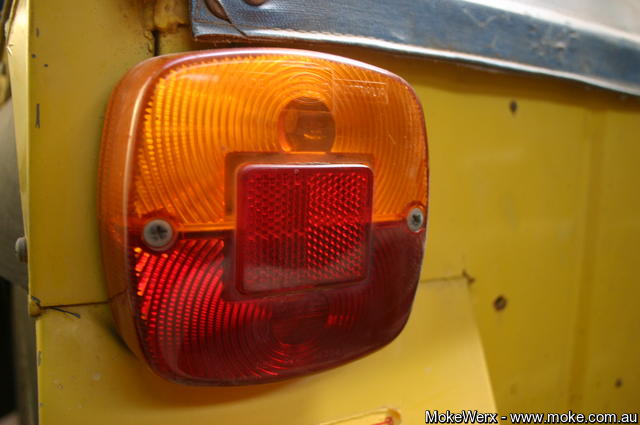 The 'Square' Hella light was fitted to almost all Mokes from the re-introduction of the Californian model in 1977 through to all Mokes by the end of poduction in 1982. The lense is quite unique in terms of having half amber and half red with a square red reflector in the middle. Inside the there are two twin fliament globes, the top handle the Indicators and Reverse while the lower globes does the brake and tail lights.

Another 'feature' of the lights is that fitment required a slight change to the body in the form of the top of the rear guard being depressed at the top edge to allow the light to fit flat on the rear panel. In the picture you can see the shadow of the depression around the bottom corner of the light.

It is believed this particular light was not fitted to any other production vehicle but was available from Hella as a universal light. Its closest relative was fitted to the GM Holden one tonne tray ute of the same vintage and although the lense was the same the inside the GMH version only had one contact/filament in the top globe that handled both Reverse and Indicators by way of a share wire to the rear. If you can source the GMH variety it is possible to fit some diodes to the indicator and reverse wires anduse the single globe or move the reverse wire to another white light for a more usable white light.

Over thirty-odd years the plastic base plate that holds the wires, contacts, globes and that the lense screws into has become quite brittle on most vehicles which has cause the entire assemblys to be replace with some aftermarket alternative. One tip for the unwary is that when un-doing the two nuts the hold the plastic base to the vehicle the nuts under the guard tend to be rusted on and the base plate only has to small platic tabs holding the head of the bolts. These two factors with a heavy handed but of grunting trying to turn the nuts off almost certainly causes the head to break the two plastic tabs and if the base is brittle enough bigger cracks and issues. Use a spanner/wrench on end end when tryng to remove them.

In the Hella range the style of light was superseded by a smaller similar shaped trailer light that was were never fitted on the Moke from the factory, however it does appear as a fairly common replacement until more recent years when more alternatives were available including LED versions. 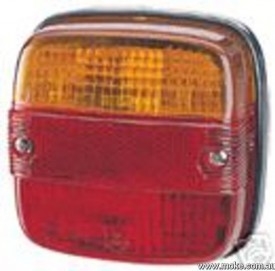