All mini/moke wheel studs are the same size at 3/8" UNF, but are available in many different lengths to suit the different brake and wheel combinations. These are the ones that are important as far as Mokes are concerned..... 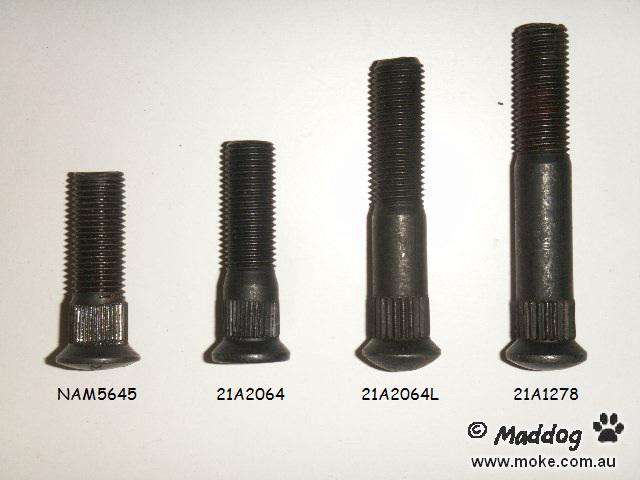 NAM5645 is the shortest stud available, and the only correct stud for the front wheels on a disc brake moke. I have never seen these for sale in Australia, but are readily available in the UK.

212A2064 is a standard mini stud, and the most commonly available. They are used with non-spaced drum brakes - which are rarely found on mokes. They are too long for Sunraysia nuts with disc brakes, and will lead to snapped studs. New disc brake conversion kits will probably have these fitted.

21A2064L is the standard stud for narrow spaced drums. These are usually only found on little wheelers, where the drum measures around 17mm thick.

21A1278 is the standard stud for 1 inch spaced drums on a Moke. They are fine to use with Sunraysia wheels on the rear, and on the front if you have drums all round.

Australian Mokes used different part numbers for some of these studs, but obviously these are no longer available. The above part numbers are the closest you can get, and in most cases they are the same stud.

With pressed steel wheels and open nuts, length is not that critical as long as there is at least one or two turns of thread past the nut. With Sunraysia wheels or any closed nuts, it is very important to use only the correct length stud, as they can bottom before tightening on the wheel.