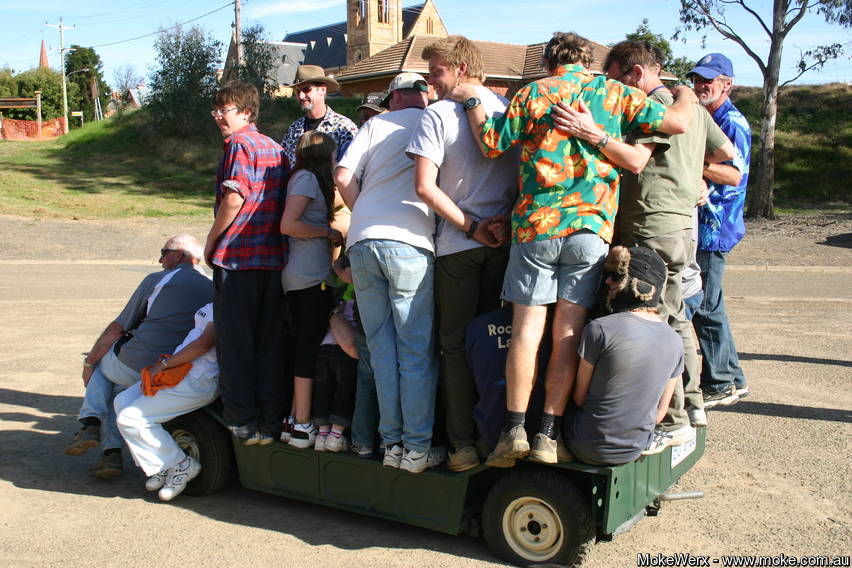 At the 2011 National Moke Muster I got to enough people involved in one of my less than planned ideas, to see how many people could fit in or on a Moke. The answer for the day was 36 and although a couple were small children, some of the more hefty participants balanced up the ledger. The stunt wasn't without problems either.

During the display on the Sunday the crowd was starting to look a little bored so I grabbed the portable PA system and encouraged a number of people to come over to my Moke, #509 arguably Australia's oldest surviving Moke, and start piling on to see how many people we could fit. Probably the best bit of thinking I did for this idea, or perhaps the only bit of thinking, was to use one of my own Mokes rather than ask someone else to sacrifice their pride and joy. 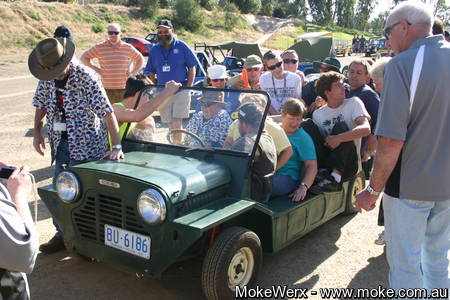 The crowd was a little slow to get into the idea but after calling in a few favours to get some people to start things rolling we had a lot more interest and the demand was pretty serious and lot of people missed out. The initial record setters started by sitting down on the seats and in the back area but after some more encouragement decided that they could get more on if they stood up. Given I was kind of making up the rules as I went along pretty much anything was acceptable, except for no one was to sit on the bonnet.

At around person 32 climbing aboard there was a rather loud bang and the front of the Moke sank heavily and few people fell off or jumped off in panic. Figuring it was nothing that couldn't be fixed I told them to climb aboard again and a second bang was heard but now being accustomed to the noise nobody got off so we filled up the remaining space with people. Maybe should have filled up the tyres with air also! 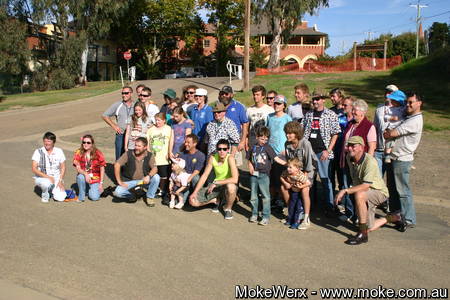 Not having anyone from the Guinness Book of World Records handy, I asked everyone to hang on for about 15 seconds before climbing off orderly and proceeding  past our official counter who came up with the number of people as 36. Confirmed by a couple of people standing behind him. The official photo was taken of all those involved.

Damage to the Moke was confined to a front strut/trumpet/cone which collapsed into lots of little bits to become scrap alloy which to this day still has not been fixed.

So the unofficial record for the most people in or on a Moke, excluding the bonnet, is 36 of various shapes and sizes.

And who were the 36 who set this 'world' record?

Working from left to right these are the people I can identify, but if you belieive you can add to the identity then please use the feedback form to let me know where you or the person you can identify is.

MOA Memebr from Donald (I know his name, just can't remember it)

Unknown (Can only see shoulder in Grey shirt behind above person, Probably Bob H.)

Unkown (Guy over thee back in Shades, possibly Pete Power)

Unknown (Guy at back in grey shirt)

Unknown (hidden in shadow of the guy in Hat)

Unnown (Guy in PJ's and Hat and beard)

Unkown (guy in black/blue shirt at back)

Unknown (Guy at back in white peaked hat)