The real number of Australian Mokes 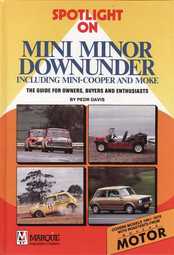 If you look around the Interweb at any number of websites and even published books that quote the number of Mokes built in Australia as 26,142 you may be surprised to find it is at odds with the number 34,704 that is displayed on the brass plaque fitted to the last Moke off the assembly line in 1982. The most likely source for this misinformation comes from a book that unfortunately doesn't provide any information as to where it got is number from but in the context of the book it is most likely correct, however it is not the final number.

The 26,142 number found in 'Spotlight on Mini Minor Downunder' which is one of these books where they reproduce a heap of old magazine articles and promotional brochures to sell it for a fair whack and maybe it is good for Mini folks, but I found the Moke information limited and not that good.

The 26,142 figure is mentioned twice in the book on Pages 11 & 12 and given the other inconsistencies regarding the Moke it may or may not even be the correct number but that hasn't stopped it being referred to and copied from one website or book to another as the true figure. On Page 12 of the book, it gives the best clue as to what this number really is about. "In October of that year(1978), when local production ceased in Leylands Enfield plant, NSW, total sales had reached 176,284 Minis plus 26,142 Mokes. Mokes continued to be built until 1981".

Hence the figure of 26,142 quoted is likely the number of Mokes sold by October 1978 when they stopped building Minis, nearly four years before the last Moke rolled off the production line in 1982(yes the book and everyone that has copied from it is wrong about 1981 too). And I believe this is where the number was first  interpreted incorrectly and the many have just repeated I blindly.

Thank you to Dean Chapman who originally put me onto the reference in the Spotlight Book.

For more information of the number of Mokes built in Australia this more recent article has some more numbers to consider, How many Mokes were built?