How many Mokes Built? 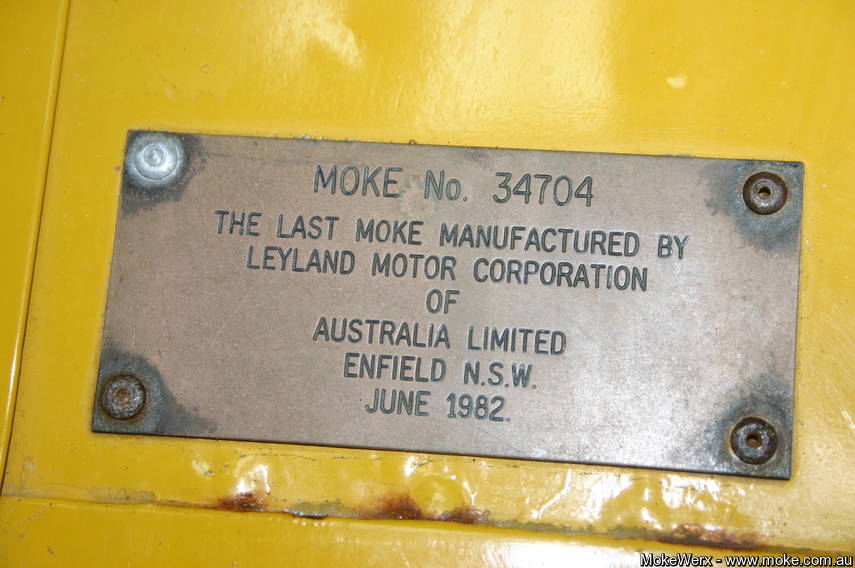 Nobody will probably ever really know for sure, however I will put it at 38,630 at the time of writing this and it is possible the number will creep a little higher over time.

For as long as I have known about this brass badge that is fixed to the last Moke to roll off the production line in Enfieild I have taken the view that this number is the correct number of Mokes produced in Australia. I even wrote this article, Real Number of Mokes, pretty confident of my view that the final number is still 34,702, and I still think this is correct, but more Mokes were built as I will try to explain.

In John Sneddons well researched book Mini and Moke Production in Australia he comes to a figure of 38,902 based on data he has accumulated from a number of sources, including the MokeWerx Australian Moke Register, and I agree with the method he has arrived at for his figure. Although I still have a view that the Export Mokes built in between 1970 and 1973 are over estimated by around 1,000 vehicles in Johns book.

So how can a plate produced by Leyland at the time all records would have been available to them, be publishing one number(34702) and yet still be around four to five thousand short of what is evident to have come out of the factory between 1966 and 1982. It comes down to the word 'Manufactured' that appears on the pictured plaque and that the original Mokes that were only assembled here between 1966 and 1968.

This week, and until something comes along to convince me otherwise, my plausible explanation is that whoever researched the details for the Last Moke plaque only considered Mokes starting at YDO18 in 1968 when the tooling to construct all of the Moke arrived from the UK and the Moke was thus manufactured here. They excluded production numbers for the YDO7 Moke(10" Wheels) that were only assembled here from CKD(Complete Knocked Down) shipments from the UK with a few local modifications.

Based on the figures in John Sneddons book for YDO7's assembled here(3,928) and adding this number to the YDO18 and YDO30 production that I believe make up the pictured plaque we get to the figure of 38,630 for a total production which is much closer to the estimates in the book Mini and Moke Production in Australia.  This also supports my view of the number of Export Mokes built, though regardless of what eventuates there I feel the numbers better reflect the total number of Mokes 'built' in Australia.

Because later YDO7 Mokes may still be around to surface on the AMR or in John's own records I suspect the number may rise slightly. Whether the number of CKD's the YDO7 Mokes assembled in Australia were built from appear on the count for Mokes in the UK is beyond the scope of what has been considered here.

There it is, this weeks interpretation of the number of Mokes built in Australia, thanks to John and his book that pushed me along to further our knowledge of the Moke.