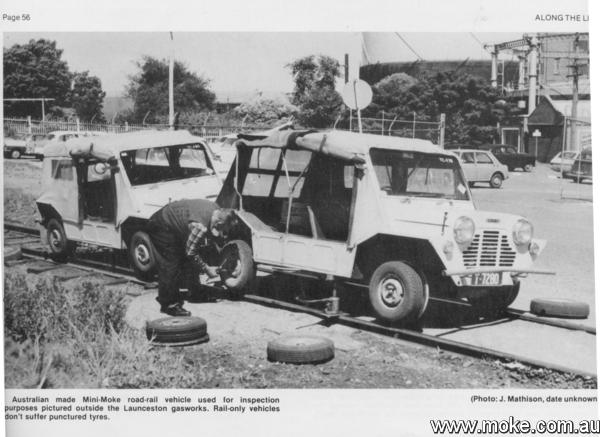 The Tasmanian Government Railways purchased between 16 and 26 Mokes, possibly from Mitchell Motors in Tasmania for the purpose of being rail service vehicles that could be driven on the road or on the rail tracks. Figures are based on 10 being purchased in the mid to late 60's and the sequential Fleet numbers of 475 to 491 in late 1970's suggesting either another 16 were purchased most likely the 13" wheeled variety around 1976 when the the second drawing for the rear flange appeared or another 6 were purchased after the initial order of 10.
From reading the documents you can see in this article, the drawings for the rail flanges and spacers were done in June 1966 and the magazine article in October 1967 says 'recently introduced'. The later drawing was dated 1976.

The magazine article in Rail Transportation in October 1967 provides technical details that should interest Moke and Trainspotters alike as it explains the modifications and purchase of the Tas rail Mokes. Flanges were fitted behind the road wheel/tyres that allowed the Moke to use the rubber tyres for traction on the steel rails while the flanges kept it tracking properly.
The rear sub-frame was narrowed and the shocker mount moved accordingly. A De-Rail Bar shown in the drawings below appears to have been used with a jack to hold the Moke in up in the air while the flanges are removed or added to the wheels. The Moke pictured is an 10" wheel Moke from 1966 or 1967 but later on 13' wheel Mokes were used.

In the National Archives three documents can be found that provide detailed drawings of a Spacer and derail bar for the Tas Rail Mokes. Thanks to Craig, DirtyPaw for finding them. These first two drawings dated 1966 show the rear wheel spacer and rear De Rail bar in Imperial measurements. The rear wheel spacer depth comes in just a touch under 2"(50.8mm)

On the last drawing dated 1976 the rear wheel spacer is now measured in metric and the depth is now 53mm or just a bit over 2".

There is rumoured to be one or two still in existence, however only one has surfaced recently at the 2009 MiniFest in Tasmania where Mel B.(no not the Spice Girly) showed her partly restored TasRail Moke. In the pictures above you can see the modifications to the rear trailing arm, and the mounting points of the front shockers.
Michael Dix of RailTasmania.com has provided some more information regarding these special Mokes.

"There is a reference in the Annual Report (either 1964 or 1965, would have to check) about getting these vehicles for road/rail use after evaluating various light vehicle types. They were eventually replaced by the Toyota Dynas, but there was still a fleet of 16 Mokes around in 1977/1978 when AN very thoughtfully did a very detailed report on the system. These were allocated to the various Track Supervisors and Permanent Way Inspectors at various locations and were given fleet numbers between 475 and 491, although 489 was allocated to the Chief Traffic Manager's fleet, 488 was listed as spare, and 490 was allocated to the erecting shop for some reason. Only 487 doesn't seem to have been around at this time.
The allocated values varied widely, from $6900 for 477 down to $501 for 489, suggesting that there was a range of age for these vehicles.
Photos are very rare, I certainly don't have any in my collection."

The photo on the right here taken by Nic Doncaster, a rail buff, was taken in 1986 on the Eyre Peninsular in South Austraila of what is believed to be a TasRail Moke. This one has a soft top however it is believed they wore metal hardtops when in use in the 70's. More information on the Nic Doncaster TasRail Moke page.

Comments from October 2007
A number of people have commented that the TasRail Mokes were yellow with a metal hardtop and that perhaps the phot by Nic Doncaster one is not in fact a TasRail Moke. Looking closely at the photo you can see the wheel flanges behind the tyre which does match the TGR design. The Western Australian Rail Mokes use a second set of small rail wheels at the front and back to guide the Moke so it is definitely not one a WA Rail Moke.
I was talking with someone recently in Tasmania who remembers his Father driving one of the TasRail Mokes and bringing it home after work where he and his Mates used to play on it. He is going to look through some old Family photos and see if he can find any pictures of the Moke.

While attending the SAMC Easter weekend in Naracorte I was speaking with a local there who said her late Father used to drive Mokes for the railways on the Eyre Penisular and although she was not 100% sure she did think they used be able to drive them on the rails. I left her my contact details if she ever comes across some pictures in the family photos.