Starter motor doesn't turn, is the starter solenoid is faulty.

The starter solenoid has the important job of connecting the starter motor directly to the battery cable to get the power to turn over the engine when you turn the key. A starter solenoid that doesn't work can leave you stranded unable to start the engine but here I introduce some basic knowledge about how they work and some tricks for getting it working again.

There are two type of starter solenoids normally found on the Mokes,the first pictured is most often found normally mounted on a bracket coming off the side of the cylinder head near the starter motor and is electrically operated by an external switch. The second type pictured is a push button variety that can be operated electrically or mechanically and tends to be found mounted to the transfer housing case near the starter motor. 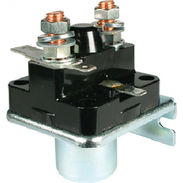 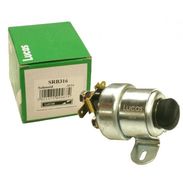 The starter solenoid is fitted inline between the battery and the starter motor with the cables fitted on each of the large posts and inside is a thick piece of copper that moves to make the contact between the the two posts/cables. The internal contact is activated or moved by a switch, normally the ignition key, sending power to the  solenoid that creates a magnetic field that pushes the contact against the terminals inside. On solenoids that include a push button, the button forces the contact onto the terminals.

In this dismantled, read smashed apart, push button starter solenoid you can see the two contacts below the terminal posts that are connected when the round disc moves up and make contact either via the ignition key or button being pushed. 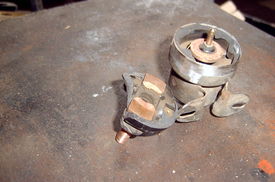 The solenoid requires only three wires to make it work, the first is the thick high amperage cable coming from the + side of the Battery and it goes to the terminal bolts with the flat blade connectors underneath. A slightly smaller thick but short cable goes from the other terninal post on the Solenoid to the terminal on the Starter Motor.

The third wire that is required is normally a  small white wire with a red trace and that connects to the small spade/tab terminal located between the two posts and is activated by the ignition key or switch inside the Moke, and requires that the casing of the solenoid is earthed to body or engine to complete the circuit. Therefore if you remove the solenoid from the car to test it on the bench or locate elsewhere in the car make sure you have a good contact to earth or the negative side of the battery.

The remaining wires you see attached to the solenoid are there to connect to the cable from the battery to supply power for other functions on the Moke and have nothing to do with the function of the Solenoid, however if there is no brown, normally, wire going from one of the spade terminals up to the fuse box and ultimately the ignition or switch then there is no power to come back down the white with red wire to activate the starter solenoid. 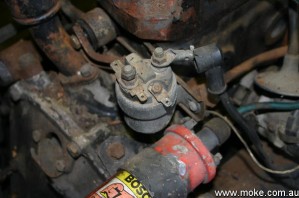 When it comes to symptoms there aren't too many to choose from.

As for causes there is not a lot to choose from either, there are really only a few things that can go wrong.

1) You turn the key and nothing happens.

When the ignition key is turned to the Start position the power to the solenoid should cause a reasonably loud dull thud that can be heard or felt in the Solenoid. If you turn the key and you don't hear or feel the thud in the solenoid then you need to determine why there is no power getting through to the solenoid. The power comes via the thick brown wire via the un-fused side of the fuse box into the ignition switch and then goes to the white with red trace wire down tot he solenoid and then earths via the body of the solenoid. If you are testing the starter wire, white with red trace, the key needs to be held in the Start position to close the circuit and allow the volts to flow.


2)You turn the key or switch and you hear a click but nothing happens.

If you are getting the dull thud of the solenoid activating but no power, or not enough power power, is getting through to the starter motor then you can one of the following issues.

To eliminate the terminals inside the solenoid as the cause of the problem you can use a thick screwdriver or thick piece of metal to short between the two terminal posts, and thus bypassing the contacts inside the solenoid. Because we are playing with the high amperage circuit you need to use a thick metal object and expect a lot of spark and 'arc welding' to occur when you make contact. And it does leave a scar on your screwdriver or spanner and can damage the thread.
If shorting the two terminals fires up the starter motor then the problem is inside your solenoid, if it doesn't then you need to look at your starter motor, battery or cables.

3) The starter motor keeps spinning after the key is turned off.

The easiest to identify is the starter motor just keeps spinning after you turn the key back from Start or off. For the first few times a hit with a solid object on the solenoid can dislodge it, but over a short time it will probably become more frequent and you run the risk of the starter motor running continuously and the only way to stop it is to disconnect the main cable to the solenoid or starter motor and if you don't have a 'kill switch' that will require finding a spanner to undo the terminal and in that time the starter could overheat and essentially destroy itself.