The fail switch is designed to alert you to any brake problems by sensing any pressure difference between the front and rear brakes. To do this the master cylinder incorporates a shuttle valve connected between the two fluid circuits, and a switch. If one side looses pressure, the valve moves allowing the plunger on the switch to drop into the groove on the shuttle, completing the circuit and earthing the light on the dash. 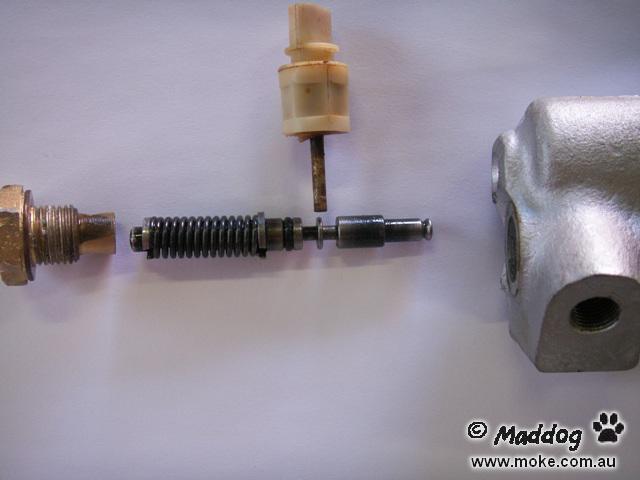 Once activated, the switch is designed to stay in the 'on' position until the switch is removed, allowing the shuttle to return to it's normal postion. The light is also wired to the oil pressure switch and is illuminated when the ignition is turned on so you know the globe is okay.

While all this sounds good, in the real world you will probably find you lose all brakes long before the light comes on - and won't have time to look at the dash if your brakes don't work!

The other problem is if ever you need to remove the switch - either to reset it or overhaul the master cylinder, it will probably break off. You can block the hole and live without the light, or for around $20 buy a new switch.

There were two types of switches used in Mokes. Both work the same and are interchangable, but have different plugs. Mokes up until 1979 used the oval shaped plug on the left, and from around 1980 on they used the triangle plug on the right. 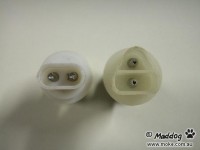 The oval shaped switch is part No. AAU2454 and also fitted to 77-80 MGB's, Triumph TR7 and TR8. They are quite common in the UK, and a search for the part number will provide plenty of suppliers. They are also readily available on Ebay by just searching for the part number. 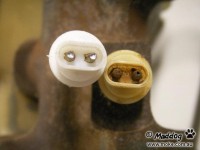 The triangle shaped switch is part No. AAU3821A and also fitted to Rover SD1's. They are less common, but available from Rimmer Bros in the UK, or again try Ebay or a google of the part number.

Finally, be aware some Mini parts suppliers list a fail switch part No. AAU1752A. These look similar to the oval switch, but are usually black plastic. They are to suit the later UK mini with a boosted master cylinder, and will not fit or work in a Moke.