The most obvious feature in these Mokes is the rear mounted fuel tank mounted on the rear floor inside the sub frame with a fill cap in the rear panel where the number plate would normally be located. The left side fuel tank is not fitted and the top panel has no sign of the hole for large filler next and cap on the standard fuel tank of that era. 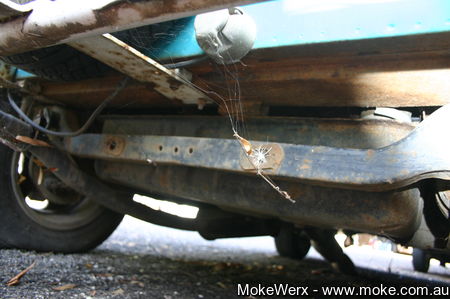 The rear tank is bolted to the rear floor of the Moke using 5/16th captive nuts inside channels spot welded to the normal floor. The front and rear mounts are offset and that prevents the tank from being fitted in reverse. 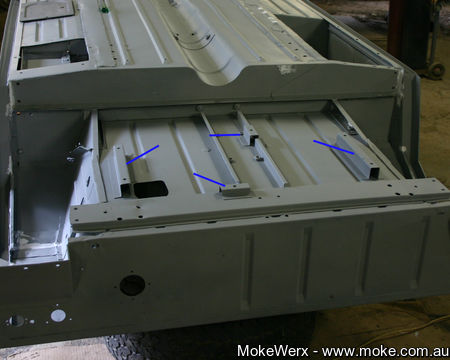 The exhaust pipe is routed around the rear sub-frame and tank coming down middle and then heading to the left side and then right to run between the fuel tank and the rear wheel and exits on the same side. 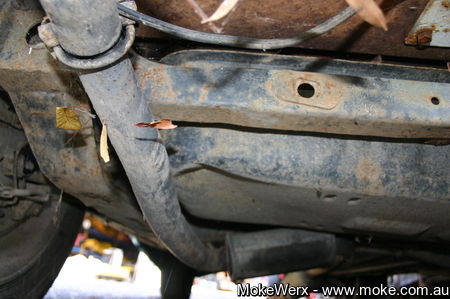 The fuel is added to the rear tank via the filler neck in the rear panel and down through the rear floor. 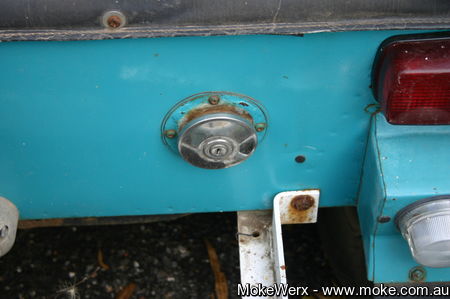 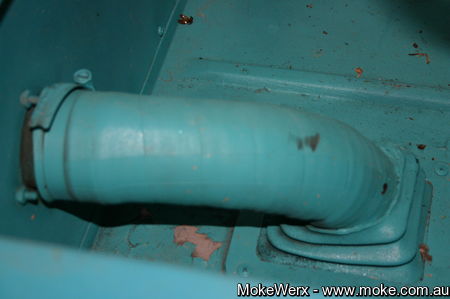 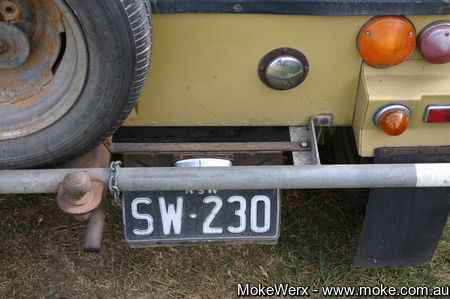 Another easy to distinguish feature of the Californian Export Moke is the depth of the wheel arches to accommodate a side light to meet US standards it is believe. On the front was a rectangular with Amber lenses and reflector while on the rear was a similar item in Red. 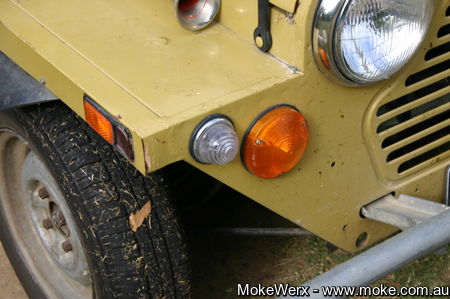 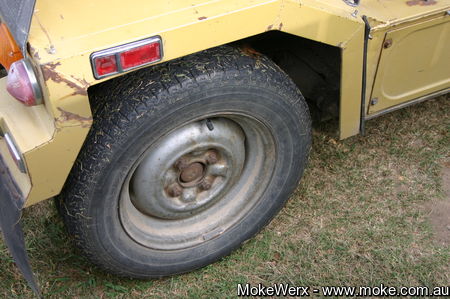 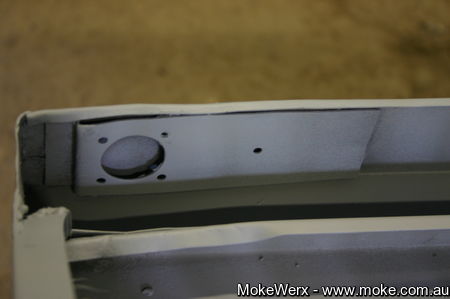 On the rear the normal guard extension that was added to handle the 13" wheels was further modified with a distinctive rectangular box to handle to hold a red reflector. The rear lights were also a unique combination of large round lenses not found on other models. 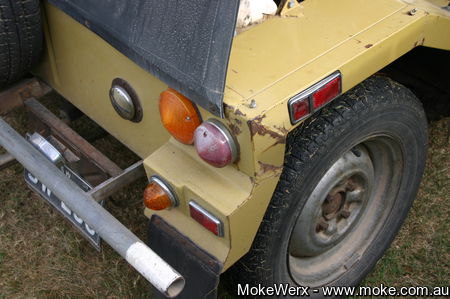 One of the best features never introduced to other Mokes would have to be the removable panel in the lower portions of the inner guard on the left side. By unscrewing this panel below the flute that left the air escape from the radiator you could have access to the brake fittings, upper arm retaining bolts, radiator drain plug and lower radiator mount. 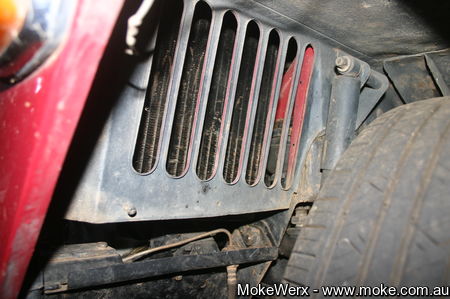 Enough of the normal radiator shroud remained to stamp the body prefix and serial number while the majority of the metal shroud was trimmed away and a removable shroud was fitted. Another brilliant idea that never got used elsewhere, making removal of the radiator the easiest of all the Mokes.

There is a semi spherical recess in the firewall near the carby to accommodate the larger air cleaner fitted to the SU 1 1/2" carby that was fitted to the 1275 engines used is almost all of these Mokes. The recess re-appeared in standard production Mokes a few years later as the bigger carby became more common place.

As these Mokes were originally intended to be left hand drive two special brackets and a different engine steady were fitted at an angle to the bulkhead to avoid interfering with the Master Cylinders that were going to be fitted.

For reasons I have never learnt, the normal speedo assembly was raised proud of the normal dash pod by the use of a bevel ring. 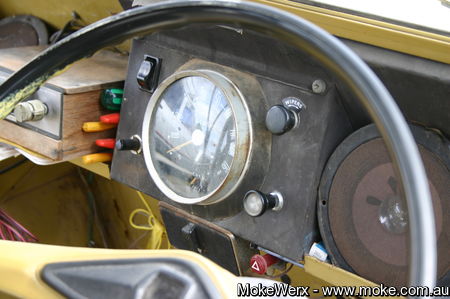 Again for US laws the Moke was fitted with a red with white triangle pull switch under the dash to handle the Hazard lights the included unique wiring to allow all four turn signal lights to flash. Visible just below the choke in the above image.

Steering wheels in these Moke were coloured to match or be similar to the paint colour of the Moke. I haven't been able to find if this was all Export Mokes or just some but in the above image you can see the colour of the steering wheel matching the pain colour of the car.

On top of the side-boxes a square pattern of rubber matting was used to protect the paint i assume. 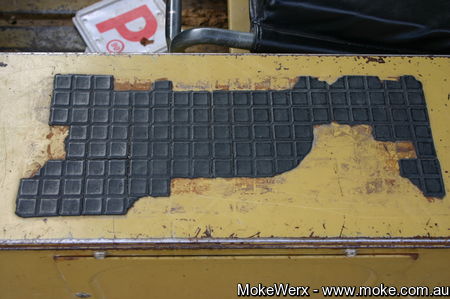 The bonnet and lower edge of the side-boxes were decorated with a two line pine stripe that was stuck on. 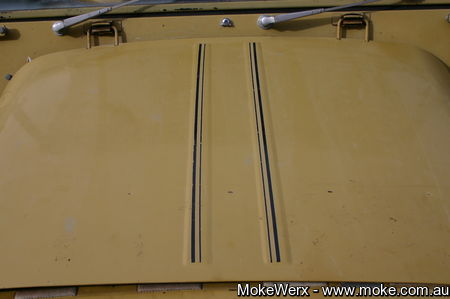 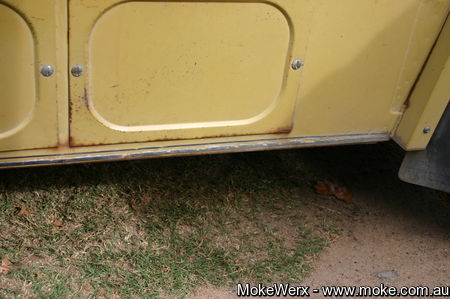 On the front panel above the grille a special box shaped Leyland badge was fitted that although similar to those used on other vehicles was unique to these Mokes as far as I know. The badge had Leyland Australia around the Leyland logo. 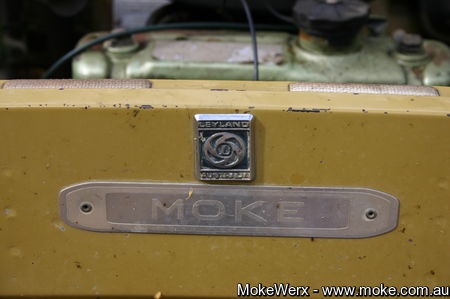 The upholstery for the seats and canopies saw the introduction of the Orange Bali and Verve(Black and White pattern) used on the Mokes for the first time. I also have read of a third pattern but I can't recall a picture of the material. 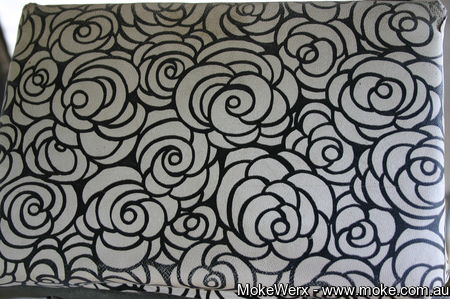 While some of the early Mokes considered for V.I. did have the smaller engine, anything I have seen with the above features was always fitted with a 1275 of the 1204 or 12YG family. 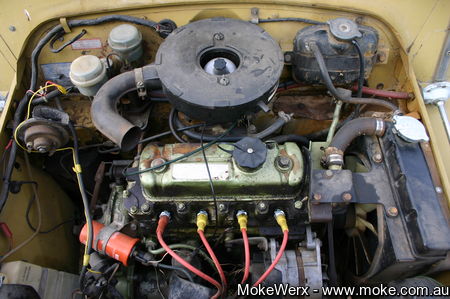 With the 1275 fitted a vented sump guard with three rectangular holes and metal mesh behind them were fitted. 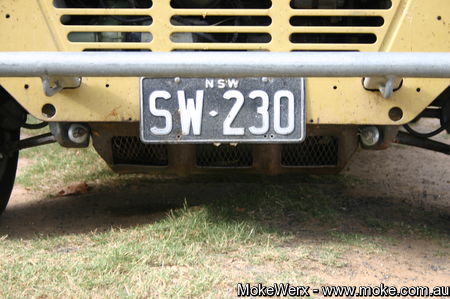 A very squared off looking top radiator bracket was fitted to hold a four core radiator.

A rubber strip was fitted each side to protect the rear guard from stone chips comes from the front wheels. 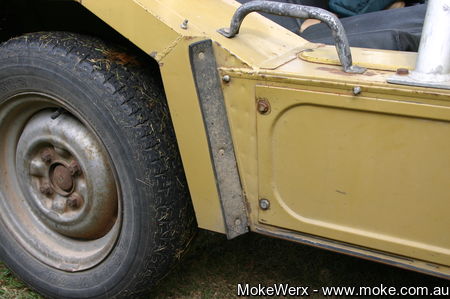