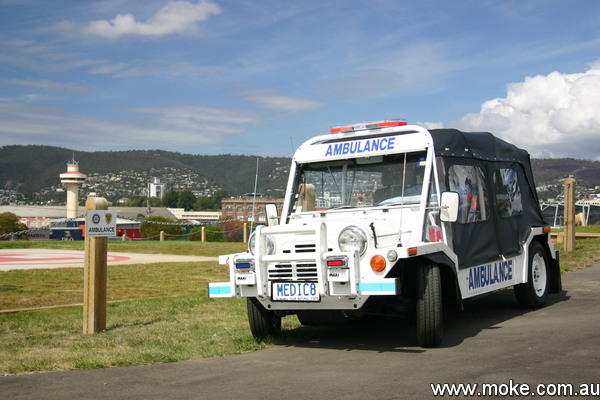 Ambulance Private is believed to be Australia's only fully private owned Ambulance service and main function is patient transfer and special events support, which is how the Moke Ambulance came about. David and his people were looking for a small vehicle that could move amongst the crowds at Rock concerts and sporting events and general crowd gatherings and capable of carry a patient and contain the usual 1st response type equipment an Ambulance would normally carry. Now for some of us a Moke would have been our only choice, but for Ambulance Private the Moke just kept drawing them to its suitability as the other contenders like quad bikes, AT vehicles and electric vehicles just kept falling off the short list.

A suitable Moke was found in Tasmania and thus began the restoration and refit with mobile stretcher, medical supplies, oxygen and medical gas tanks, and the real flashing lights and sirens and a couple nifty little seats from a bigger Ambulance. All the work was done locally in Hobart a couple of blocks away and the way it has been fitted and finished off inside is quite imaginative and came in a bit shy of $30,000..

Take some photos, take it out

A few days before we left for the Apple Isle Assault 2007 tour a couple of Taswegians on the The Moke Forum mentioned an article in a local paper regarding this Moke Ambulance which has just hit the streets. Using the Internet I was able to track down David Watson as owner of Ambulance Private and shot off an email asking if we could come by and take some photos. No problems he replied.

So once we got to Hobart I arranged for those in the group to go into Hobart and take a look on Friday Morning. David arranged to meet us at 10am and as we rolled up we got ushered into to the Ambulance Depot, a medium size warehouse in the Hobart CBD, and then began to manoeuvre and park the Mokes amongst the workshop and other Ambulances parked there.

David then gave us all a little speech about Ambulance Private and how the Moke came about which i have tried to recall in the above words. He then let us take photos, poke and prod his Moke and while my head was underneath the front guard checking out the bumpstops, he showed off the siren which happens to be under the front guard. My ears were ringing for a few hours after that.

Then in a very unexpected gesture of trust David said why don't we take it out so the local gardens and take some photos of it with all the Mokes together, however he has a meeting to go to so one of us could drive it. There was a bit of jostling but I was lucky enough to get guernsey from Rod 'MokeMyDay' Owers. I must say i have never driven a Moke on a busy City street with red and blue lights flashing before, naughty, naughty me. I didn't play with the siren until we got to the park, which I didn't realise at the time but some of the others were trying hard to prevent us from being moved on by the Royal Hobart Yacht Club board of directors and here I am screaming through all the different selections on the siren console. 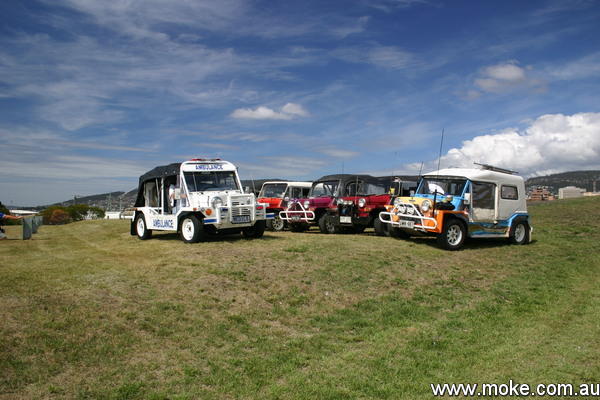 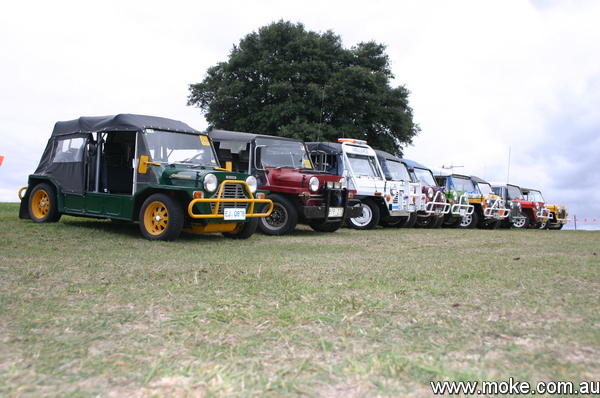 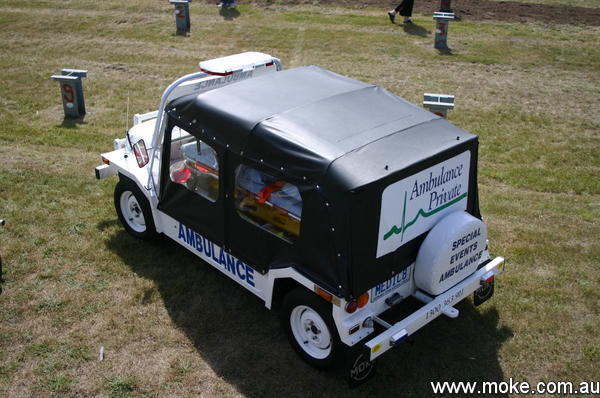 First impressions are how cool is this Moke, it presents well, has lots of nifty well thought out things to cram all that ambulance stuff in there and still be usable. In my view needs some more work on the mechanical to raise the suspension from the bumpstop otherwise you might get loaded up with dehydration and get unloaded with a few broken ribs and sore neck!!

The Moke itself is a January 1973 Export Moke with the genuine 1275 and drum brakes which is probably best the patients don't know about that detail and it repainted in a While with Blue lettering with a black hood. Prior to its purchase someone had fitted a side mount fuel tank which was a good thing as the stretcher forces the spare wheel over the normal rear tank filler.

The seats are one behind the other on the drivers side using SAAS seats from a bigger ex-Ambulance. Unfortunately the seats are pretty high causing me to have to keep bending the neck to look through the windscreen as I naturally looking over the top of the screen. So for the little jockey size ambo's I am sure they are fine. On the plus side though these seats have the seat belt coming out of the shoulder of the seat in a traditional lap sash arrangement and even the other one was in the rear there is plenty of room to put them side by side. i will be keeping my eye open for a pair of them.

Steering wheel was something from a late model mini or the like and much better than standard truck style wheel it would have come with. The dash was pretty much from the factory but with a few additional switches around the place. The rest of the controls for the two way radio, siren and lights and medical display were nicely mounted in the 'box' under the stretcher which was taking up the whole of the left side of the Moke. 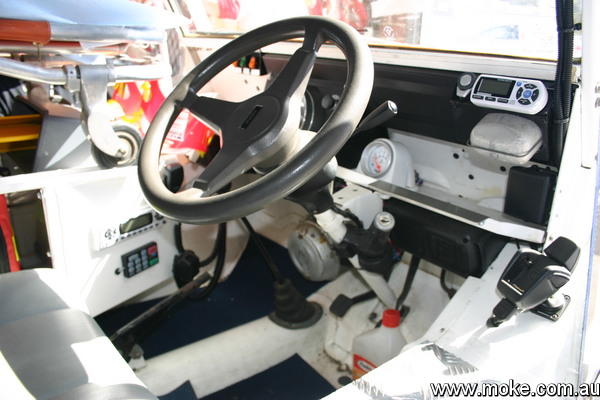 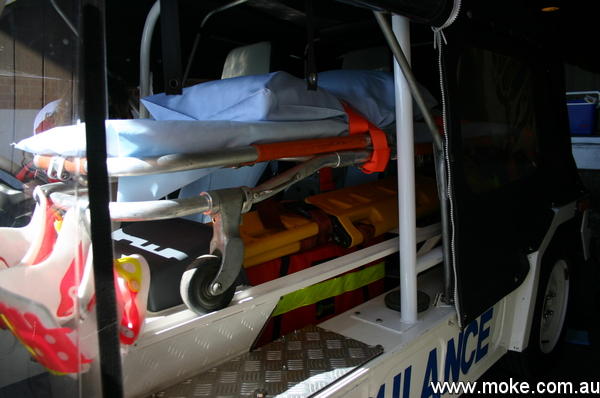 The stretcher rolls in just like a normal Ambo however with all the mechanics to allow it to fold up as it rolls in it puts the patient up around shoulder height to the driver and if you are claustrophobic you might hope they have the top down the day you need to go for a ride. The soft top looked very conventional until you nice a bit of an extension in the rear, dropping almost vertically. This extra bit hides the oxygen and other gas bottles in the rear section behind the 'passenger'.

The normal rare as rocking horse pooh side lights had been nicely replaced by some after market amber reflectors that filled in the holes and although David is trying to keep it as original as possible, I think the previous owner(s) didn't really have the same desire and had a few mods of their own before Ambulance Private took it over. 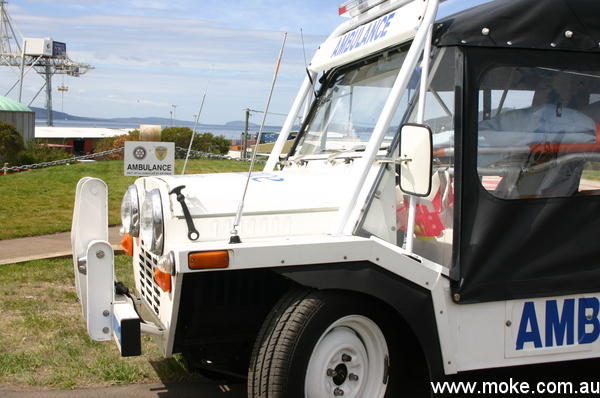 In all it was a great little Moke to visit and a big Thank You to David Watson and the guys at Ambulance Private who looked after us and even let some of us leave their Mokes in the depot while they walked around the Hobart CDB for the day.