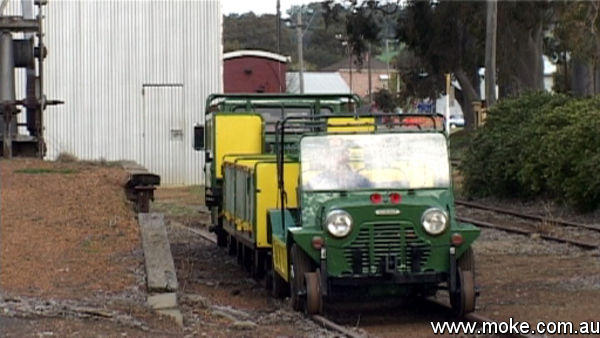 The Kojonup Tourist Railway began in 1993 with modest beginnings from small band of interested locals and with the donation of a Mini Moke by a local 'identity'. The Moke was stripped down and restored and fitted with Hi-raliers to keep everything is line on the rails.

The Moke retains the original rubber tyres for traction and support and is guided by the HiRailers as it pulls along two carriages and a Daihatsu 4WD on the back.

The official website of the Kojonup Tourist Railway provides a lot more history about the whole effort and makes for interesting reading, but I have extracted some parts relevant to the Mokes involvement.

"With the support of the local engineering, mechanical and the bus service, along with volunteer labour and with the donation of a mini Moke, once own by local identity Mr Pat Jones, KTR commenced.
The moke was stripped, overhauled, repainted and converted to a Hi-Railer and two passenger carriages were manufactured. A flat-topped work vehicle was built for the construction and maintenance on the line. Rolling stock was purchased."

"A Daihatsu was donated and converted to hi-railer initially for a service vehicle. As the wildflower weekend rail rides became more popular, this vehicle was used to assist the Moke in pulling passenger carriages and the flat top was converted to carry passengers."

The ABC did a story on the Kojonup Tourist Railway and you could watch a little video of the Moke in action by clicking here, however the video no longer seems to be working but you can still read the story.