The Moke of Goat Island. 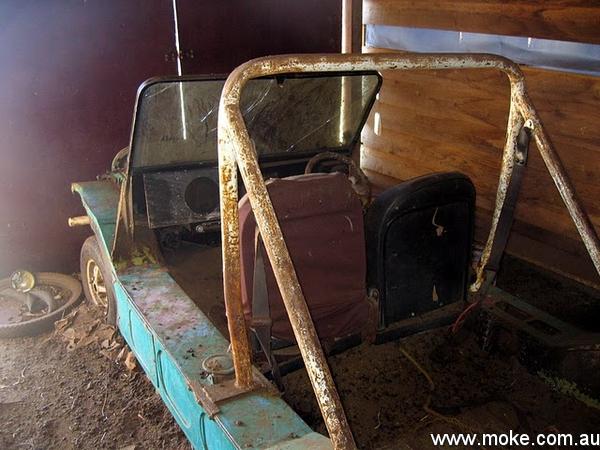 A few years ago I caught the end of a filler article on the Channel Nine News where a couple of images of this Moke flashed by. I chased up the story with Channel Nine, the item was about an island in Western Port Bay in Victoria where a herd of goats had been neglected and left to fend for themselves by the new owner of the island. I heard later the Goats were relieved of their misery and the owner got a slap on the wrist but quite frankly they and previous owner should have been hung for the neglect of the little Moke and the Goats of course.

A few months after the story I asked my friends Kinga and Rohan to take their sea kayak for a bit of paddle and see if they could recognise the island from my description. Well they did find the Island and got inside the house/garage where it was stored which wasn't really too difficult thanks to the vandals before them and they took some photos to share with us.

The Moke is from towards the end of production for the Little Wheelers and has had at least one paint job done on it and the engine has been replaced by a 1275 and the wheels are Mini and not something you normally find on a Moke.