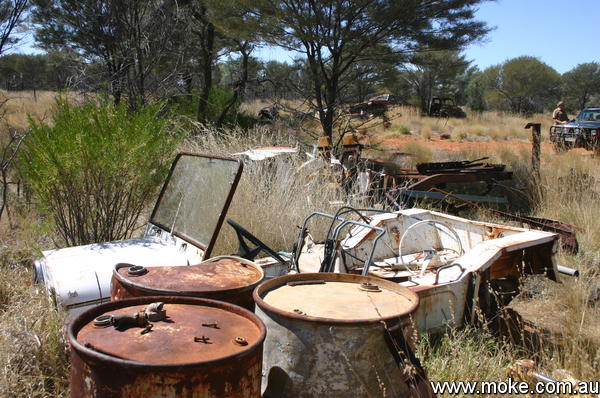 Another interesting Moke we came across on the Outback Icons Touur in 2011 was this Australian built, and it would appear registered, Moke that is factory left hand drive. Many factory lefthand drive Mokes were produced in Australia but not too many stayed.

Rotting away in a vehicle graveyard in the Queensland scrub I was shown this Moke by the owner of said graveyard and the very varied assortment of machinery from PWC to mini Graders and odd trucks. He didn't really know a lot about the Moke other than he had bought it from a farm a few hundred or more kilometres away some years earlier. He said he also had a spare LHD steering rack and couple of other things from the car.

In a strange coincidence a member of the Icons trip was accosted by a Moke owner in another country town in NSW whom mentioned that there was a Left hand drive Moke on a farm a few hundred kilometres away also. Adding two plus two and coming up with five it is likely that this is the some Moke as the distances and places mentioned do correlate in bush kilometres between the two sources.

The story from the second encounter was that the Moke belonged to a member of the Canadian Consulate in either Canberra or Sydney and was their personal car. I have attempted to find out more through the Canadian Consulate but to no avail. What isn't clear, was the car ordered and registered with the intention to take it back to Canada or had it originally been bought out from Canada and left here?

Looking at the Moke the obvious give away is the steering wheel is on the wrong side to most of the people reading this however more importantly is the location of the expansion tank and Master Cylinders all being very factory looking and not homegrown. The body number suggests a very early 1973 Moke however somewhere along the line I was told it was a 1974, however the 102?9 makes it in the first 300 off the production line for that period in 1973.

There is no obvious sign of an ADR Compliance plate ever having been fixed to the firewall with only one small hole like that used being up behind the expansion tank. The engine steady bracket is the angled type used in the Export Mokes of the period but the engine steady and engine bracket appear to be the common variety and don't seem to be connected.

The low back seats, assuming they are original for the Moke, were not legal by 1973 in Australia as headrest were required by 1973 adding to the idea this did not have to comply with Australian ADR's. Another sign of this being a genuine LHD Moke is the lack of holes on the drivers side for the grab handle. Curious though is the two different positions of the grab handles in the rear of the Moke.

Looking at images of flooding across Queensland in 2016 shows that this Moke would have been under water for a week or two.