It was a great day in SEQLD, Me and Jayden met up with the others at Jimboomba along with Moemoke, Dynky and family from Victoria who were on their way to the Gold Coast.
After phoning various absent Mokers and demanding to know where they were, we then drove up Tamborine Mountain where we partook in morning tea and helped ourselves to the Pavlova Smorgasbord provided by Team Moke2B. Some also managed to clamber down to Curtis Falls which is a totally unique waterfall, unlike any other waterfall in the whole World as it does not have a Pub next to it and is also best viewed without footware.

After a couple of hours of chat, discussing the back catalogue of Roger Miller, the weather (of course!), modelling our matching designer t-shirts that we found in a charity bin (nobody knows what the design is about or who had commissioned them) and picking passion fruit seeds out of our teeth, Hag had to fly (no, he really had to fly). So the rest of us headed to the other side of the Mountain to the famous Avocado markets where we bartered heavily for the best fruit on the mountain.
We then descended the mountain and took a leisurely drive through the countryside to Jacobs Well on the coast. It was lucky that Maddie had a map with her as her dad (CQ_Moke, the lead car) didn't have a clue where he was going.

After briefly stopping at Jacobs Well to sample some dementia, we then headed off to Cabbage Tree Point for lunch at the famous Cabbage Tree Burger Bar. We all had fish and chips though as burger was off the menu. To compensate, they were offering a special "Buy 1 serve of chips, get 6 serves" deal. After eating 20kg's of spuds, Chippy Dave fell asleep. So, (and after Jayden stole his smokes), we tiptoed to our Mokes, climbing over the chip mountain that blocked our way, and drove quickly away.
A short drive on the M1 took us to Redland Bay and then onto Wellington Point where we devoured one of TLP's famous cheesecakes washed down with a teabag, some sugar and milk (we're still waiting for the water to boil).
Here are some photos of our day.

Nicko searches for some PG Tips. 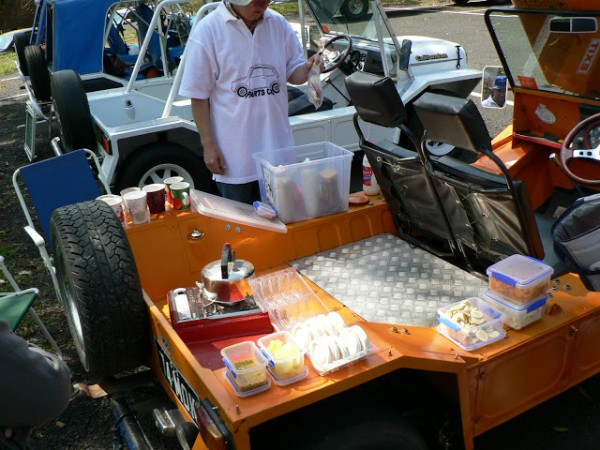 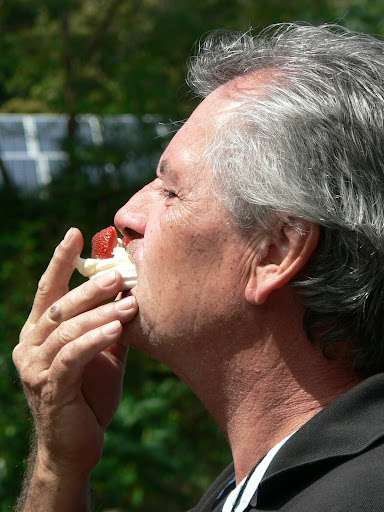 The way I see it, if you're gonna build a time machine into a car, why not do it with some style? 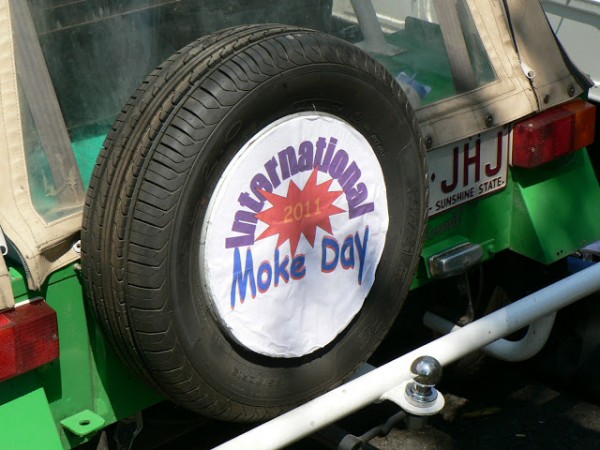 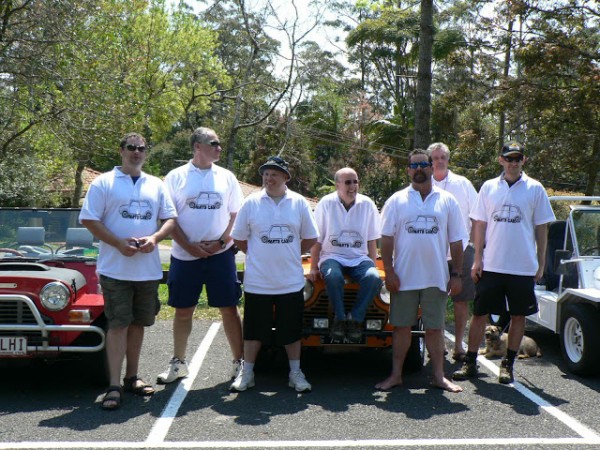 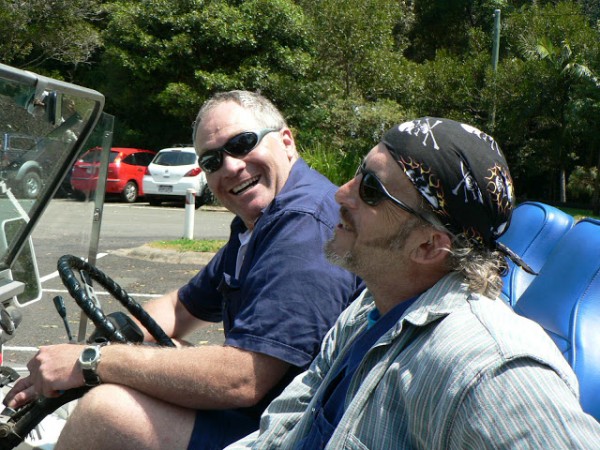 Marvellous Miyagi, SuperHero and all round good guy (well, actually not that round. He was in an "L") 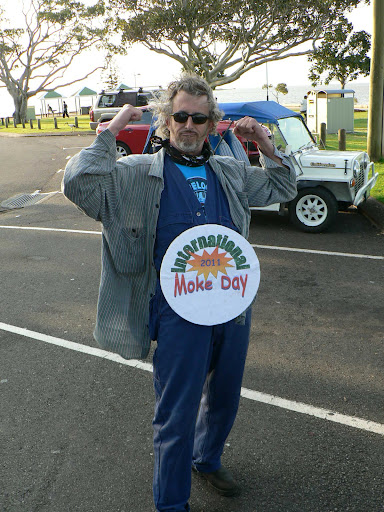 .......meanwhile,Casper slept on oblivious to all that happened that day. 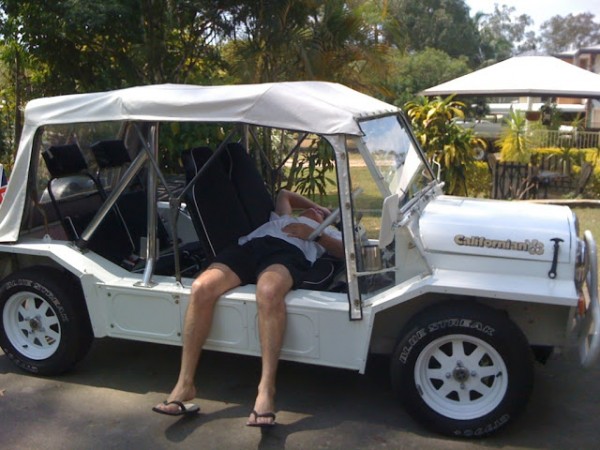 So we all met at Rocklea, waited for a while to see if Clockwork Orange or Mish would show but unfortunatley we missed them.  Hopefully next time we may get the opportunity.  Anyhoo, first to arrive was TLP with me in tow.  Next to arrive was HAG, then Icko (found out why Icko - i have much to learn) and family, and CQ Moke kids 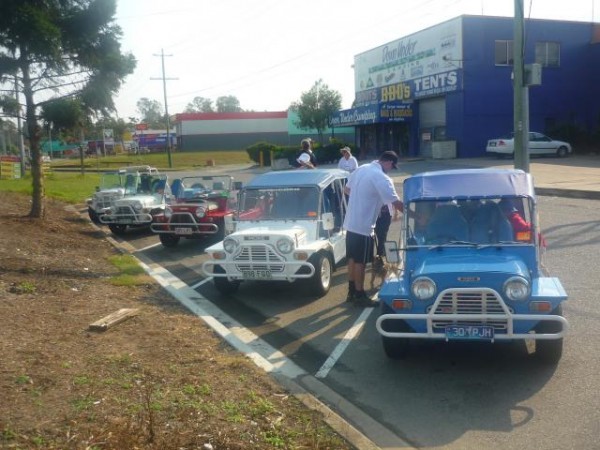 Next we were off to Jimboomba via Beaudesert 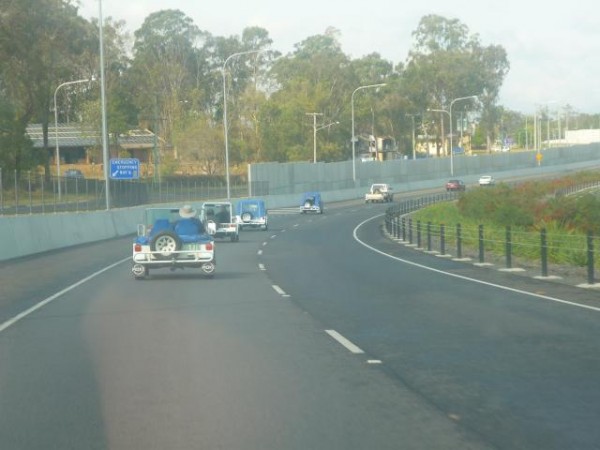 When we arrived at Jimboomba we were graced with the presence of Chippy Dave and Dean! Unfortunately Casper was unable to meet us having a "big" night the night before. Got all the mokes in a row. Two things of note occured here, while we were parked there was a car show in the grounds behind us, one of the marshalls came up to us and invited us to become the "Star Attractions' of the show, however we didn't want to put all the hotrods and show cars to shame- so we politely declined.. besides we had an itinerary to drive to.  The second of note was  the DOG

.  now i had finally convinced the SWMBO to come on a drive - (fist time in a moke) so thing were on tender hooks and could swing either way, and i was working hard to make a good impression. The DOG

casually approached, cocked his leg and did the do on the missus..... Ooh man.... on the way back Sid the dog

was anachronised as Somewhat incontinent Dog) 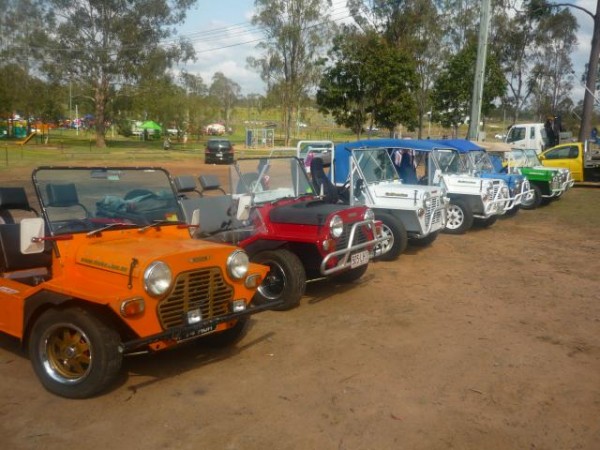 Anyway, off to Tamborine All parked at Tamborine having morning Tea 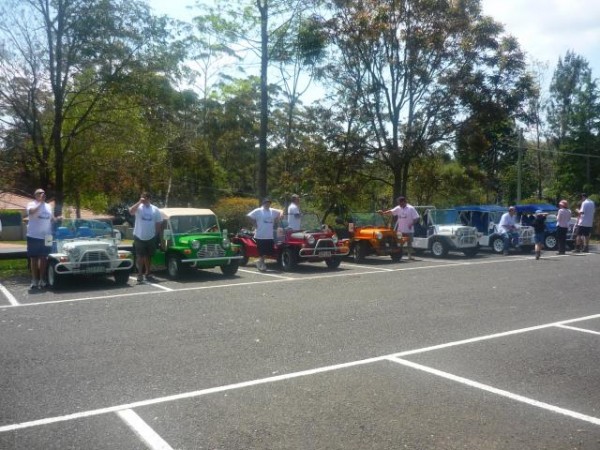 Confusion as to where to eat lunch,  Jacobs Well 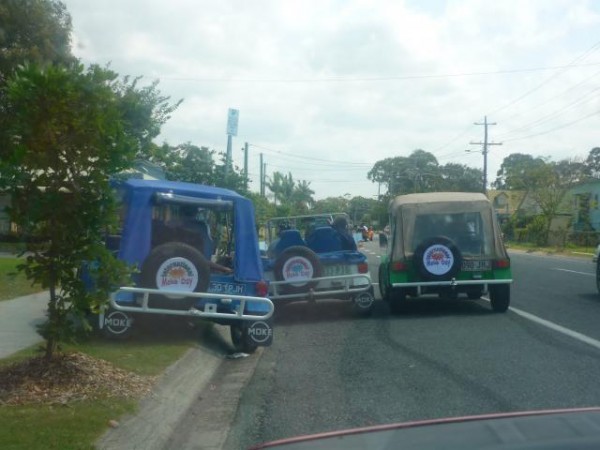 other photo's were taken, i'll give the others a chance to post if they wish.