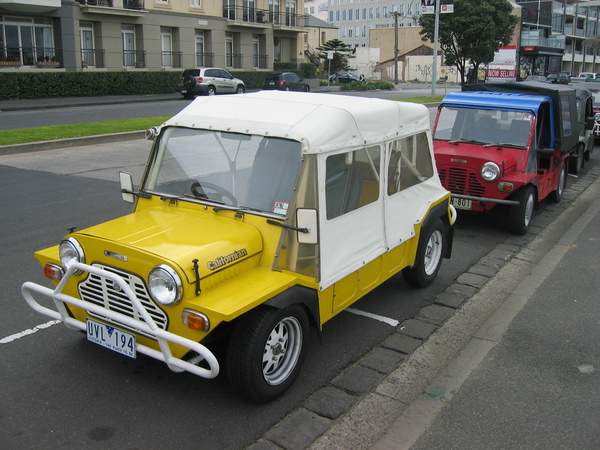 Eleven Mokes braved the overcast and high winds to take in the sights of Melbourne before settling on the banks of the Yarra for a BBQ.

At 6:30am the sun was out and bright blue sky, at 6;40am everything was dark and light rain was starting fall horizontally, but we managed to convince ourselves the day was going to be okay.

Arrived at the meeting place just as others began to roll in behind us, soon we numbered 9 Mokes. Laurie and Aarron made some big efforts to get there, traveling 5 and 3.5 hours respectively. MOA memebrs Ron D., Kevin O, Kinga and Rohan, John and i were joined by Laurie, Aarron, Paul and Felicity, Matt and ??? were in attendance.

We headed off to Albert Park to take photo's in the chicane on the back part of the circuit before heading down for a parade down Acland St and Luna Park. A film/news crew in front of Luna Park meant we couldn't stop so we just drove past with Rohan taken the photos.

By this stage we were joined by Andrew, Dennis and Nicholas in two Mokes and just after Ron and Matt left for other commitments for the day. Over the Westgate and into Williamstown, leaving Laurie to head home into some nasty wet weather, we annoyed the locals for late morning stop.

From there it was back over the bridge and into Docklands where the wind was that strong it managed to pick the plastic steering wheel centre off my Moke and took off across the large intersection, just missing a tram and ending some distance away in some landscaping.

Stopping in the Docklands area was not an option, one reason being all parking is managed by Wilsons and the gravel coming off the landscaping hurt to much to sit still. Up through town to Lygon St where we somehow managed to misplace Kevin O. who was heading home for some house repairs anyway.

Onto the Eastern Freeway and up onto Yarra Boulevard to our planned BBQ stop, which was taken over by some family gathering, so a few photos and off along the lovely drive, albeit 50kmh limit to the banks of the Yarra near the Botanic Gardens.

Spent an hour or so socialising, looking at Mokes and waiting forever for the BBQ's to generate enough heat to make sure the Sausages couldn't give milk!!! Paul and Felicity headed home, Aarron was pointed in the right direction and he left while the remaining 5 Mokes went to Cruise Chapel St.

Some pretty expensive convertibles were prowling along with us, but we were stealing all the looks from the Latte Sippers and they were relegated to garnish in our fruit salad of coloured and interesting Mokes.

We all departed at the end and headed our own ways home manging to get sunburnt, wind burnt, but not Wet !!!

Thanks all those who attended and supported the local event in such dismal looking conditions.