A modified bracket to support the remote on a Rod change gearbox that allows greater access for the exhaust to fit, especially extractors intended for Minis.

There are a number of reason why you might need to make this modification to the bracket that holds the remote selector for the Rod change gearbox, most common are you are fitting a straight through pipe with a larger diameter or you are trying to fit extractors designed for a Mini that has the remote further back. On the Moke pictured for these examples the owner had purchased the extractors and we also were trying to keep the pipe as high as possible in the tunnel for the Cape York trip in 2006.

In the first picture, courtesy of Maddog, you can see one of the most common set ups with the rear bracket reaching across the tunnel fixed to each of the supports found on the bodies from the early 1970's onwards. A variation is to use the same brackets but mount the cotton reels mounts between the body and the bracket, which is the factory set up, however that does leave the set up more exposed to being damaged as it will sit a about 30mm lower. 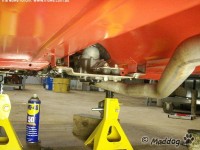 This modification is it remove the drivers side of the bracket out the way of the exhaust and remount it with a nut and bolt through the peak of the tunnel.

How complicated you make the redesigned bracket is up to you as you  can see in the next image the bracket has been bent upwards at a right angle to reach the roof of the tunnel but also had extra metal weld on for extra support. Keep in mind this car was intended to go off-road so for the average bitumen Moke then the extra support may be considered over kill.

A variation on the above bracket to go vertical and then fold back towards the passenger side to keep the bolt in the center of the tunnel. It is easier to bend but does make fitting the nut and bolt a little more fiddly.