Fan on the right way.

Check that your Fan is on the right way around, although in my experience I have found it doesn't really make that much difference to the amount of air flowing through the radiator. 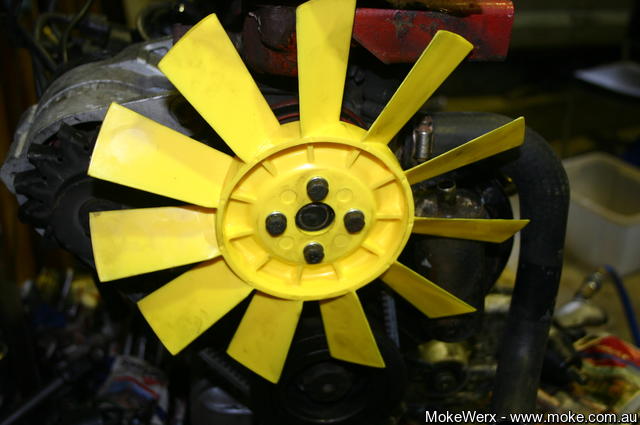 A simple check under the bonnet can tell you if the fan is the right way around on your Moke. It is not difficult for the novice or even experienced mechanics to put the fan on backwards and although it doesn't make a big difference to the air flow, it still travels in the same direction, just a little less than intended.

In the above picture you can see the strengthening ridges between the bolts and the base of the blades that should be facing the radiator while on the other side in a nice smooth surface that looks pretty and should be what you can see when looking from under the bonnet.The fan is drawing the air from the engine compartment and pushing it out through the radiator which is contrary to most radiator set ups where the air is drawn through the radiator by the fan and blown out across the engine.

The actual important feature is that each blade is shaped like an aeroplane wing with a thick leading edge trailing off to a thin trailing edge. The leading edge should be on the engine side so that it maximises the air flow past the blades and into the radiator for the air can pass out into the wheel arch.