While hydraulic systems do wear, the main enemy of brake systems is moisture, causing rust pitting in the bore of the cylinders. If it is only surface rust, or the cylinders just need a good clean up, then you can easily hone them yourself and fit new seals. 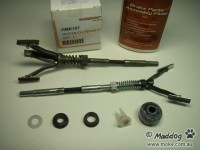 If you can't remove the pitting after a minute or two, move on to the next step.

If the rust has caused pitting in the bore, all is not lost. A good brake specialist can sleeve your old cylinders with a stainless steel tube and fit new rubber parts. Stainless is a lot harder than the original cast bore, and will never rust. 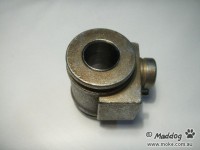 If you look closely you can see the thin stainless tube pressed into this rear brake slave.

The process is quite simple. First the cylinder is bead blasted to clean it up, then it is bored out, and a stainless sleeve is fitted with a special glue. The glue is cured in an oven, the fluid holes are drilled and it's given a coat of paint.

While a lot of brake shops say they can do sleeving, in reality they outsource it. For a cheaper and quicker job, try to find somewhere that actually does it themselves. Really good places can also replace worn clevises and small parts like bleed screws and locating pins.

For a bit of extra cost and effort, a properly sleeved cylinder will probably outlast your Moke! The place I use give a lifetime warranty on all stainless sleeves - meaning they are fit and forget. Pretty hard to beat that, no matter how cheap the replacements are!

For what you can recycle - read on.

Early Mokes were fitted with the familiar tin tank brake and clutch master cylinders. Late Mokes also had these for the clutch. 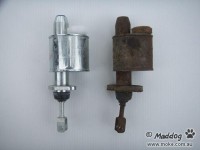 If the bore is sound, you can hone it and fit new rubber parts, but unfortunately sleeving is a lot harder. The problem is once a sleeve has been inserted a hole needs to be drilled to allow fluid into the bore. This means unsoldering the tank, drilling the hole and soldering the tank back on. It can certainly be done - but with new ones available freshly plated and ready to go, it is hard to justify.

New tin tanks are not cheap, but there are plastic tank replacements available for less cost. These use the same cylinder, and apart from the appearance can be considered the same.

Fitted in the early 70's these are no longer available, and are perfect to recondition or sleeve. They can be painted or plated to look original, and new reserviors are now available. 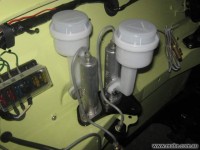 These ones on Ian's moke look better than new after a bit of work!

Fitted from around 1976 on, the original green band tandem cylinder is no longer available.

New yellow band cylinders are stepped bore, meaning the front and rear circuits are reversed, and require new brake lines to be made and thread adapters. So it is a lot easier to have your old one rebuilt - provided that your reservoir is in good condition, as these are also no longer available. 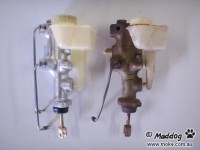 Rebuilt tandems and the new replacements are around the same cost.

Usually any moisture in the brake system tends to be concentated in the slave cylinders, meaning they will be the first to leak or seize. But before you buy new ones, have a look at this.....

Here's a couple of clutch slaves and 5/8" rear brake cylinders that have seen a bit of action and are completely seized. 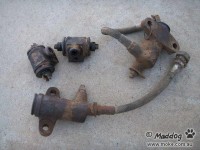 And here they are again after a full rebuild. 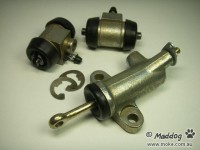 You will pay about $70 per sleeve including seals, which does make them more expensive than new cylinders - but these will last a lot longer! I have had new brake slaves leak not long after replacing them, but never a sleeved one.

It seems everyone wants disc brakes on their moke, and for good reasons. But new kits are expensive, and usually secondhand sets will need a full rebuild. Before deciding which direction to take, do a bit of research on prices and the parts you will need. You may find the new ones aren't as expensive as you thought! 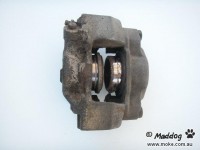 If you already have discs, then the decision is easier. Calipers are a bit different in that the seals are in the body of the caliper, and the piston is the part that needs to be smooth. New pistons and seals are readily available, and with a bit of time and effort they can be like new again. 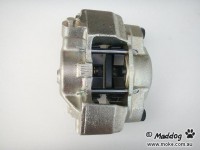 One final thing on disc brakes - just because your calipers aren't leaking doesn't mean the seals are OK! Apart from keeping the fluid in, the seals are all that drags the pad away from the disc, and when they get old and hard they stop doing their job. This leaves the pads rubbing on the disc, which can then glaze the pads and overheat the disc leading to poor braking.

Bling (or how to make them look like new)

While most masters and calipers had some form of plating, slaves were all bare cast and look a bit ugly after a while. You can just paint them, but remember brake fluid will remove most paints, so choose one that is specifically recommended for brake parts and follow the directions on the can.

If you want them to look like new again, electroplating is very cheap and easy - but there are a few things to be aware of.

Slaves are all best plated before sleeving or honing. Tall Lockheed/PBR are the same.

Tin tanks need to be done after sleeving, and after the tank has been replaced. You will need to block the outlet port with a bleed nipple, and block the filler cap and bore with wax or plasti-dip.

Tandem masters have a PDWA or brake fail valve built in, which has a very small bore and is impossible to hone, so these need to have all the ports blocked before plating. Sleeving can be done before or after.

Calipers can be plated as they are, or the bore can be masked with acid resistant laquer or plasti-dip. Probably best to ask your plater first what they recommend - although the coating is only 12 microns thick and unlikely to make any difference. They can also be powder coated any colour. Leave the old seals and pistons in to protect the bore, then after baking throw them away. They will need to be stripped first, as any brake fluid remaining can leak and ruin the finish. Again, check with the powder coaters first.

It is a bit more work, but I think the results speak for themselves! 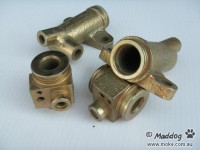