Some of the tyres listed here are marked "For Rally(or Competition) Use" therefore you will need take this into consideration in regards to your insurance, roadworthy and other legal issues when looking to make a purchase. The tyres I have seen do not use the word 'only' or 'Not for Highway Use' found on some therefore there is room to argue there use is suitable for normal road use.

Generally competition tyres are made of a softer to much softer compound of rubber so the usable life of the tyres will diminish fairly quickly when used on bitumen so if you are going for the look rather than the practical off road use of the tyres then expect to be replacing them more often than a normal passenger car tyre.

For me the appeal of the competition style tyres is the much thicker side wall and sidewall protectors, the three or four ribs you can see in some of the pictures, which I think are important as the previously favoured(read only ones available) Toyo 720's Mud/Snow tyres were prone to becoming useless once they got staked through the sidewall from sharp rocks or twigs in the sandy tracks.

I have only had the opportunity to use some very second hand Dunlop SP85R's on our Outback icons tour last year so please don't consider this article anything more than a review of what is available and not a critical review of what is best or lasts the longest. All tyres listed have fit 13" rims but you will need to pay attention to recommended rim widths, keeping in mind Moke Sunraysia style rims are 5.5" and standard pressed metal rims are 4.5"

With the exception of Trackside Race and Rally Tyres where the owner Craig answered a lot of my questions and let me compare some brands side by side, any links to websites of suppliers are not to be taken as recommendations, they are just places on the web where I found useful descriptions, probably 'borrowed' their pictures of the tyre or had other information about the particular tyre I thought useful..

Dunlop have two styles to choose from, down from four choices a couple of years ago, and appear to be priced in the $170 - $210. Thanks to Stuckey's Tyres for answering my questions on the Dunlops.

Stuckey's Dunlop SP83 R 175/70 - An aggressive looking tread with sidewall protectors and thicker wall. Limited to the 175/70R13 size this tyre is probably one of the few I found for this review that give something close to that old style Winter Tread look that some people are seeking. The symmetrical pattern, as my research uncovered is considered a 2wd gravel tread.

Stuckey's Dunlop DZ87R 185/70 - This model tyre supersedes the SP85R's I ran on the trip last year but from all accounts and visually it seems to to be the same tyre. For those just looking for 'chunky' this is not going to do it for you as it is a very tight and flat tyre on the rim. For off road I was very happy with the handling and much more confident I wasn't going to have sidewall issues like I had running the Toyo M&S tyres. On the bitumen they handled okay, but had to be wary not to drive it hard in the wet and was always reminded they were there by the road noise they generate on the black top. The asymmetrical pattern means there is an inside and outside edge for this tyre and it is considered a 4wd tyre.

Not the easiest thing to find on the Kumho websites but some of the specialist motor-sport tyre people seem to know they make them even if Kumho don't. :) For 13" there is a choice of one, the R800, but if shopping second hand you may find some of the older R700 tyres that were previously available or as I found n New Zealand some evidence that the R700 may still be available if you go looking.

The R700 has an interesting size with a 165/80 profile which is probably not much different to the bicycle tyre you probably had on your dragster when you were a kid but with a diameter of 631mm that gives it a good rolling distance, if you have the power, so something akin to a change from a 4.2:1 to 4.01:1 diff ratio change. The thin size I would think makes it more suitable to the standard pressed steel rims, 4.5" wide, rather than the Moke Sunraysia.

Definitely has the chunky look and edge blocks that should keep people who like to play in the mud happy as thin is better. And has three rings of sidewall protection so that is a good sign too.

This New Zealand site has the full range of Kumho and Silverstone tyres available and even sells a little bit of Mini gear so worth a quick browse. A few keywords into Google and you will find them in Sydney at Fsport and Trackside in Melbourne.

The Kumho R800 is attractive to me because you actually get a choice of three widths, 175/70, 185/70 and 195/70, the last one being particularly attractive as it gives you a diameter of just over 600mm which can give you just that extra bit of highway speed, but surprisingly not quite as much as the 165/80!!!. Still for outback sandy and gravel a nice wide tread can give you a little edge. 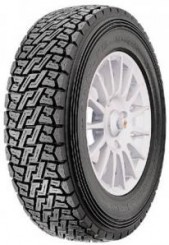 The S505 from Silverstone can be listed with an odd sizing, 14/60-13, which seems to translate to 185/70R13 is one of only two available in their range for our wheels and seems to have a decent hybrid pattern of the previous styles listed here, the second being something like a 175/70(14/55). Nice deep edge grooves might suit the chunky look for some and the tread pattern is not dissimilar to the Wider Winter Tread used on the Moke in it's later years, maybe that 30 year old original spare tyre wont look quite out of place on the back of your Moke anymore.

Found these on the New Zealnad links above or can be found here in South Australia. According to Craig at Trackside who has/had a set for me to look at, says they are no longer being imported so you are limited to whatever stock a motorsport tyre shop on the shelves.

GM44 GM45 175/70/R13 - From what little I found on these tyres in a printed catalogue there is really only one model of tyre available with a choice of compounds and being I found them in a European websites and nothing locally. I wouldn't be holding your breath to find them over here. From the small image the tread looks a little like the Silverstone S505 above.

AO35-R  - Also listed as Advan-035R in places this tyre seems to be readily available in dealers around Australia but no-one seemed to list a price that I could see. Similar in style to the asymmetrical 4WD directional designs above but also has a chunky look to keep both camps happy. Has good looking sidewall protection and Yokohama tends to have a decent sidewall on their passenger tyres normally.

Although not listed on the Trackside website, I wandered into Trackside the day after I found these on the Internet and he had some 205/70R13 on hand for me to look at; I was in love. It might be hard to imagine when it comes to tyres or a sad reflection on my life, but there is just something about this fat trerad with chunky edges and industrial looking sidewalls that really has been lacking in what I have seen so far. I Can't say I was that taken by the 165/70's from DMACK, but the 195/70 and 205/70 do look the business.

I went back a few weeks later and purchased a couple to try out on the Big Bob's tour up to Chambers Pillar, but unfortunately I missed the trip so I can't tell how good, or bad, they are and just have to look at them on the floor.

ZDM2 - Not a lot of information about this tyre I found on another New Zealand Website but they have a 185/70R13. It is a directional tyre, meaning it has a left and right side and the specs mention reinforced sidewall however no protectors are obvious in the picture so it might suit application where you don't want the extra rings in the look.

Stepping away from the competition tyre side of things for a moment, there is a Retread option available from a seller on ebay that may suit some peoples requirements and budget for look but limited or low km's and I am definitely not recommending their use. I have no first hand experience with these particular tyres and tend to have a dislike for retread tyres on any vehicle, however reports from a charity rally run earlier this year was that a couple of cars were running this tyres and most had failed over the 4,000km, so buyer beware.

Type the follow search words into Ebay or Google Search bar, 'rally retread tyres', to bring  up the listing for the tyres.