I am not interested in sparking a positive and negatives of the Chines Moke Bodies, rather how someone can "spot the difference" quickly or make an informed decision as to what they are purchasing or looking at.

The front Californian bar which i didn't get a photo of from the side is straight from the bottom angle to the top, where as the original Australian Californian bar has a backward angle for the top section.  So will start with the front panel, grill and headlights. So here we can firstly see the headlamp surrounds are squarer than an original Moke / Mini headlight surround.  Secondly the curve where the top of the face panel and the front of the face panel meet is sharp and is a welded join where the original is a pressed panel.  Thirdly the indicators are in the vein of the little wheeler mokes but modern. Here we can see the front panel again is not the pressed metal unit of the original.  the way they do this is to weld a second panel behind the first giving a sharp finish to the recess that the grill fits into. as can be seen in this next shot. In the above image we can see the front panel where it meets the top meets the angled front misses a bit.  The orginal inner panel was once again a shaped pressed unit where as this body's theme is sharp bends or flat panels - yeah i know i hear you say round on a moke? but when you see under the guard on an original body they have bends in them... 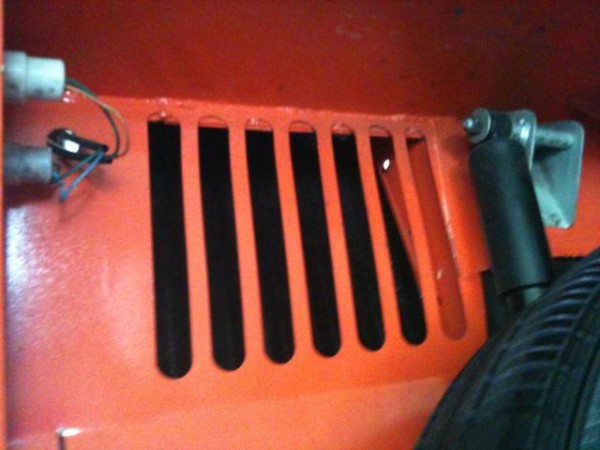 So one of the first things (from a distance) people usually notice and identify a body of a Chinese Moke are the lower sill extensions that reach from the front guard to the rear guards bit like the old school "stone flectors"...remember them?  anyway this is not totally a Chinese Moke body idea.  There were Australian mokes that had these before Chinese Mokes were made, so be careful when you first see these - it might be an Aussie body if it has sill extensions, be careful! 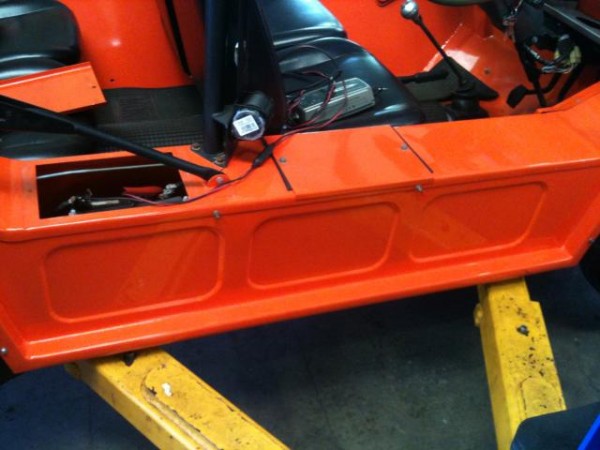 Also notice the battery cover.  These bodies do not have side access rather 2 top plates.  And these are not constructed in the same way, if you happen to inspect an original body thay had 2 rolled pressings that joined and made the top edge.  These bodies have a top panel that has a lip that falls over the edge.

Also the fuel filler is located in the top of the side pannier.  Now original Mokes up until 79 had top fill but a much larger cap, from this point Mokes went to a side fill arrangement to meet safety laws. In the below picture have a look at where the rear of the subframe meets the body.  On the original body it is an enclosed box section on the Chinese version the plate is extended from the firewall down. So a big difference of the Chinese Moke bodies is the guage of steel they have used to manufacture in comparison to the original bodies - much heavier.  in the picture below there are no groove pressings in the floor rather it is flat all the way though.  The tunnel is square in shape where the original is round. Here we can see the shock absorber recepticals, they are square in shape where once again the originals were round. Also the rear tail light panel and rear panels are different in shape.  The rear panel has vertical pressings where the Chinese Moke does not.

So there you go some things to look for or check out when looking at a Chinese Bodied Moke!