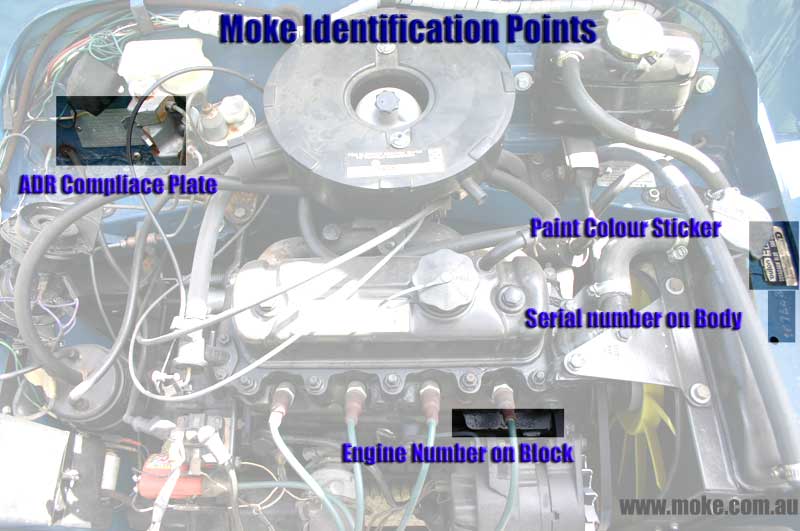 The Body Number, or in more recent times called the VIN(Vehicle Identification Number) is normally found stamped into the radiator shroud and it should also appear on the ADR Compliance Plate that is affixed to the firewall. The Body prefix should be AKPxx19Yfollowed by the unique serial number.

Engine number is found stamped on the block under the #1 spark plug , that's the one closest to the radiator. and generally has 99 or 12 as the first two characters.

This pictures should help you locate things.

During the 1970's there was a move from manufacturers build plates to the Australian Design Rules(ADR) plate and within that decade the numbering system used for body and model identification also changed twice and so did the location of the ADR or Build Plate.

Coming into 1970 the Build plate was still in use and would have the prefix of YJBABnx on it and be placed on either the firewall or even the Radiator Shroud. The plates had various styles too with the introduction of the embossed alloy plate being common by then.

In 1971 the ADR plate was found on the firewall for all Mokes by then. The position of the ADR plate on the firewall tended to move from the left side to the center and then the right behind the master cylinders over the years. In 1973 the preficx became 018 or 030 for Export Mokes and by 1978 the AKP.... prefix was introduced.

During these early years of the 70's the body number was stamped into the radiator cowling and in most cases on the leading edge of the cross member under the drivers seat. Post 1974 production move companies and locations and the extra stamping under the seat seems to have stopped.

Engine number was still under the #1 Spark plug and could have been 99, 10 or 12 prefixes

The prefix used on all Australian built Mokes during the 60's was YJBABnx. For the little wheelers 'n' was either 1 or 2 and for the 13" wheeled Moke introduced in April 1968 it was 6 and 8. All these Mokes had a BMC or BLMC build plate on the firewall just next to the expansion tank that detailed the body prefix, number, engine prefix and number, paint color and some other stuff but unfortunately no dates. The ADR plate introduced later on required the build date to be stamped into the plate.

Engine number still under the #1 spark plug and would have begun with 99 or 10.